Man of God vs Military Junta

One of many of the ongoing intimidation tactics that go on daily in the Junta domain of Fiji continued in the city of Suva on the evening of 22 August, at the home of the 80 year old past President of the Methodist Church of Fiji, Rev Josateki Koroi.

Rev Koroi has been getting some press lately with his continual barrage against the military regime and its suppressive tactics and policies over the years.

It seemed only a matter of time, like with Wadan Narsey, that the military would try to muzzle this brave man too.

According to the family source, about 6.45pm on the evening of 22nd August, the family saw a twin cab vehicle with GM number Plates circling the family home. It drove away and then another van came back about 10 mins later with 1 policeman and 2 soldiers in it. The policeman talked to a family member and demanded to know where the Reverend was.

The Reverend Koroi arrived to his home a few minutes after the truck and the military personnel and policeman tell him that he has been "ordered" to come to the camp where the Commander Tikoitonga wants to see him for a meeting of all the Methodist Talatala's who were supposedly at the Military camp in Nabua.

Apparently the Rev Koroi asked them to hand the phone over for him to speak to their commander, who they appeared to be busy phoning, but they refused. He informed the goons that he has had a long day , and the only way they will be taking him to see the camp scenery will be trussed up hands and feet and forced physically and against his will into the truck.

At which point the military personnel left .

When I spoke to the source of this news, the talatala was at the time trying to calm his distraught family and grandchildren.

It transpired that at the same time this was happening, news had already broken that the regime has now "cancelled" the Methodist Conference.

My question is then if the regime had decided already to cancel the Conference at the time they were intimidating the Reverend and his family, to what end were their actions intended ?

It is well known in Fiji that the military regime hounds and intimidates Fiji citizens daily. One of their very early victims in March 2007 was ex Major Edward Heffernan, his 40-year-old wife Mere Vulakoro, their 16-year-old daughter Shelly , and their 14-year-old grandson Peni Heffernan, burnt to death in their home after a Molotov cocktail was thrown into their home by goons unknown.

Major Heffernan was speaking out against the regime at the time he was silenced. 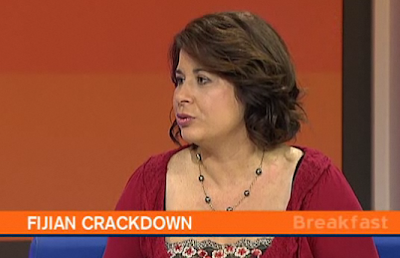 Click to view latest video on this news.
Posted by Discombobulated Bubu at 2:14 AM

Email ThisBlogThis!Share to TwitterShare to FacebookShare to Pinterest
Labels: Man of God vs Military Junta

God bless you Padre .. you have shown Fiji that we are cowards in the face of our faith .... we need to trust in our Lord and have faith in the goodness of people.