How many times do I keep telling you - don't say Holiday Inn, tell me the TraveLodge! That's how I think of it. My memory's not what it used to be and if it's the usual 5pm meeting I've probably consumed a few Aussie Journalistic Medicinals by that time as well. Because of the confusion, I ended up in some joint on Robertson Road. 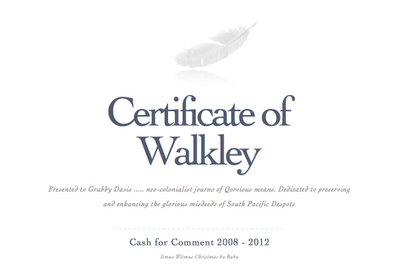 I have to tell you Shazzer, that is not the sophisticated end of Suva the City of Dreams and not the sort of place for a Walkley and Logie-award winning journalist (that's me).

When I asked for a Cab Sauv they called a taxi. So I asked for a Pinot Noir and the man said "she's off today." It wasn't going well and I was getting a bit irritated, especially when they brought me some terrible thing called Tribe to drink. I said "Do you know who I am?" and the man said "just wait until you sober up, then we can help you find out." I was getting very angry by now and told the man, "do you know that I have a Walkley AND a Logie?" He said "me too, but the girls don't mind." The company on offer didn't seem to be of a fixed gender and I have to say Shazzer, in my mind's eye you were looking like Miss World Fiji in comparison.

Cash Guy...Cash Guy - who are you talking about Shazzer? There's quite a lot of Cash Guys in our government after all. I mean the PM and the AG don't mind the folding stuff, half the Cabinet's on the take...who could this be?

As for Crazy Welsh. I got that one, you are a clever minx the way you use these secret codes, lucky I am also clever. Did you know I won a Walkley once? It could have been worse. It's a good thing you gave him that government vehicle. So when some old white dude jumps out of a G-plated Toyota Land Cruiser at Suva Market and says "tell me totally objectively and confidentially what you think of Frank's government" at least people know what to say.
But be careful when you pay old farts who left the country years ago to come back to say nice things about your government. You never know how it will end. I mean, with some of them, not all of them. I mean, don't get me wrong. And don't stop sending the cheques.

So you saw our latest strategic move on the scrap metal? It was all getting too hard and the task force was getting bored and there was no budget to pay us allowances so we decided just to ban the trade altogether. A brave official asked us 'where is the logic in that?' Silly man, we said. Because we can. Then we sacked him.

Anyway, on to more important things. Following the rave reviews I got for "Suva City of Dreams" I am going to turn it into a book. I thought it could be one of those coffee table books but then I remembered that no-one in Fiji can afford a coffee table so I'll try something different. I had this clever idea (did I tell you I won a Walkley once?) that all the chapters could rhyme with the main title. 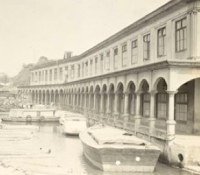 I'll start with "Suva the City of Ice Creams" and talk about the MH Milkbar where I used to sit with my one-shilling Cup O' Joy and perv at the girls who went by. Of course I was quite multiracial in my youth.
While my friends would only perv at the white girls I took a multiracial approach and I think it is this experience that has made me into the multiracial man I am today, which is of course why I back Frank's government - that and the weekly cheques.

Then will go onto a chapter called "Suva the City of Jim Beams" because, I confess, Shazzer, I did not always have the refined tastes I have today and I did go on a few drinking sprees back then. I think the last one was after I had won my Walkley and I told one of the girls 'you know I've got a Walkley?" and she said "don't worry, my boyfriend gave me one and it plays all the latest hits".  It was an innocent time in Suva back then.

The next chapter will be called "Suva the City of Regimes." I would be explaining in that chapter how Suva was taken over by a military junta which was for indigenous rights and engaged in thuggery, censorship and dictatorship. Of course Shazzer I know what you're going to say, and don't worry. I will be careful to say that in 2006 it was a military GOVERNMENT, not a junta, and its thuggery, censorship and dictatorship was all so Fiji could be multiracial.

Then I thought (and because we are running out of things to rhyme) we could move on to Suva's powerful families so the next chapter could be called "Suva the City of Shameems". By the way, where is that blonde one (or was she green? It's like the girl with the changing hair in that Harry Potter movie) who was in the Human Rights Commission? I thought she was quite tasty. She produced that excellent report on how the last elections were rigged. I nominated that for a Walkley prize for fiction but it didn't win. Pity. Anyway, wasn't she with us? What happened? Did her cheques stop?

The next chapter could be called "Suva the City of Khaiyums" (that will rhyme if you're onto your second bottle of Travelodge house Merlot). Isn't there another one who runs a TV station? (It has a good coffee shop - maybe if they send me a cheque I can put in a chapter on "Suva the City of Gloria Jeans"?). I hear he's borrowed $20 million from the development bank. I'll check to see if there's a Walkley for 'Most Taxpayers' Money Spent on Nearly Nothing'. I can probably get him one if he asks nicely.

Great, that's about an hour spent on my Fiji fantasies. That's what you pay me to write about so the invoice is in the mail.
Oh, I finally get it - Cash Guy is Yash Ghai? Very funny. But I think we should look for another codename for him because of the confusion with the other Cash Guys in the government. What about "Pad Thai"? He looks a bit noodly. And very soon he's going to get dumped in hot water.

Email ThisBlogThis!Share to TwitterShare to FacebookShare to Pinterest
Labels: Grubby muses on Suva City of Schemes