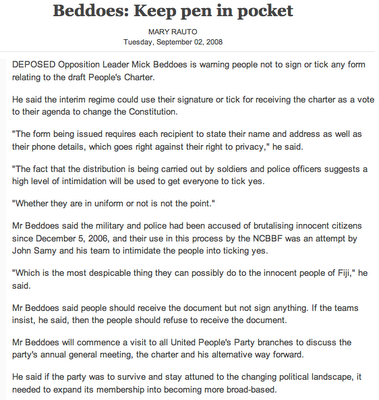 Thank you Mr Beddoes again for pointing out the obvious. Not that we don't know.

Please educate your friends and family about NOT accepting this evil document and NOT signing any piece of paper. Bhaini and the military and all those associated have shown time and time again they cannot be trusted, so why trust these people now with your private details ?

Posted by Discombobulated Bubu at 10:34 AM

Email ThisBlogThis!Share to TwitterShare to FacebookShare to Pinterest
Labels: The Insidious Evil Charter

Indeed sign at your peril.
If ever there was an example on how NOT to do things, this would be it. I suspect Samy will be running through a cabbage patch before too much longer - either that or in exile somewhere

This is a great letter I think in response to Peni Moore's stupid postulations in the Fiji Times ... Democratic values :
__________

For the information of Penelope Moore and her charter pushers, Methodists and the majority of Fiji Islanders oppose the charter because Fiji became a democracy by choice, not by coercion or mass deception or forced assimilation. Fiji Islanders believe a culture of democracy is a culture of character.

We believe a culture of character is built upon a chosen set of customary behaviour that has evolved into habits and has become unwritten laws based on principles and values of reciprocity, consideration, co-operation, patience, peacefulness, commitment, compassion, flexibility, forgiveness, friendliness, generosity, gentleness and helpfulness that distinguish Fiji Islanders and the Fiji Islands from nations with non-democratic cultures.