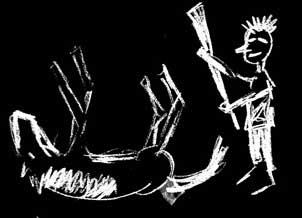 John Samy and Francis Narayan's Charter is a dead horse.

This is used when someone is trying to raise interest in an issue that no-one supports anymore; beating a dead horse will not make it do any more work.

I do not know where else in the world, when public forums for hearing "the people's voices" only attract between 2 persons and 40 people, where civil servants are used to swell numbers, and where village visitations of the toa-suwelu crowd only attract a few people in the village hall, would one persist with the programme !!!

I think we can safely assume this means a flat rejection of this crackpot, harebrained comical facade called Samy's Charter.

Prof Brij Lal is saying the same sort of thing in his opinion piece .... Prof Lal said now that the Fiji Labour Party has publicly opposed the proposed electoral reforms, which lie at the heart of the charter, it can reasonably be assumed that the overwhelming majority of the people of Fiji do not accept important parts of the document.

"Any claim to the contrary is untenable," he said.

"Put to a referendum, the charter will fail by a very large margin. That much is certain."

He said many people were genuinely concerned about how the charter would be given some kind of constitutional legitimacy which could only be done by recalling the deposed Parliament, something the interim Government promised not to do.

The figures the propoganda machine are issuing are most laughable : Here is what they said Friday 26th Sep - MORE then 50 per cent of people in the Northern Division have supported the People's Charter, according to a government charter report for the week.

The report says the total support from the three provinces of Cakaudrove, Bua and Macuata stood at 72.41 per cent.

Sounds amazing BUT what we would like to know is - is that 93.29 % of 3 people or 18 people that turned up to a village consultation?