" The primary function of Fiji's proposed new media regulator is "to encourage, promote and facilitate the development of media organisations and services". It sounds reasonable.

There is just one problem. In order to perform its duties the Media Industry Development Authority is being given the power to fine and lock up journalists, editors and publishers, censor news reports, search premises, seize documents, and shut down news organisations.

Coating a dictator's iron fist with a veneer of legality does not soften the blow.

If the New Zealand Government was minded to relax the restrictions it has put on Commodore Voreqe Bainimarama's regime, the new media restrictions unveiled earlier this month are reason not to.

Every attempt at encouraging Fiji to return to the democratic fold has been met with truculence and obstruction.

When the Government tried to promote dialogue by proposing the reappointment of deputy heads of missions in Wellington and Suva, the commodore killed the idea stone dead by nominating military spokesman Lieutenant Colonel Neumi Leweni for the position of counsellor at its high commission.

A central figure in the coup that installed the commodore in power, the lieutenant colonel is banned from New Zealand because he is a member of the Fijian military. 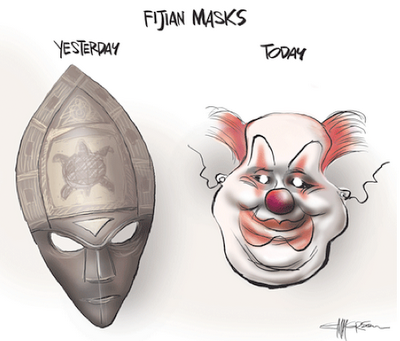 He is not. He is a tinpot dictator who has gained power at the point of a gun and is destroying his country's economy and prospects and the institutions, already weakened by three previous coups, that underpin good government.

The news media is one of them. Journalists, editors and publishers will bear the immediate brunt of the latest restrictions, but the real losers are the Fijian people, who have already lost the right to learn what is happening because of "emergency" regulations put in place last year.

Now the restrictions are being made permanent and the penalties for breaching them more severe. Individuals face prison terms of up to five years and fines of up to $73,000; news organisations fines of up to $364,000.

Journalists, unable to protect their sources and liable to detention for publishing anything an authority appointed by the regime considers to be against the public or national interest, to breach the bounds of good taste or to be likely to create communal discord, cannot do their jobs.

Free speech is a fundamental pillar of democracy. "Were it left to me to decide whether we should have a government without newspapers, or newspapers without a government, I should not hesitate a moment to prefer the latter," said Thomas Jefferson, the author of the American Declaration of Independence.

Fijians, regrettably, have been denied the choice by their self-appointed president."

Posted by Discombobulated Bubu at 3:45 PM