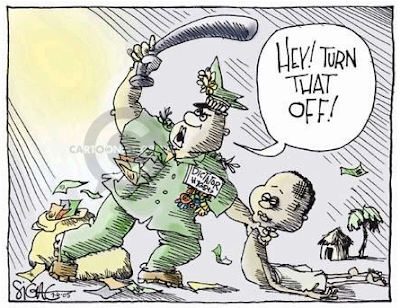 Dictating our daily life by decree
Posted by Discombobulated Bubu at 6:37 PM

Yes too late to turn down the volume Frank.

The basic nature of God's Justice: GALATIANS 6: 7-9 (KJV) 7: Be not deceived; God is not mocked: for whatsoever a man soweth, that shall he also reap. 8: For he that soweth to his flesh shall of the flesh reap corruption; but he that soweth to the Spirit shall of the Spirit reap life everlasting. 9: And let us not be weary in well doing: for in due season we shall reap, if we faint not.

THE DEFINITIONS: 1. Everything that you do has repercussions. It comes back to you one way or another. 2. You cannot escape the consequences of your actions. What you do comes back to you. 3. You will see the long-term effects of your actions. 4. KARMA - The total effect of a person's actions and conduct during the successive phases of the person's existence, regarded as determining the person's destiny, especially, in his next incarnation. 5. What goes around comes around. 6. Your actions all have consequences. Don't ever be fooled into thinking that your actions don't have consequences. Don't think you can get away with bad choices even if you don't seem to get caught. Remember verse seven tells us that God cannot be mocked. He sees it all. You reap what you sow.

Australia's Acting High Commissioner to Fiji, Sarah Roberts, is being expelled from the country.

Foreign Minister Stephen Smith has been told the decision relates to comments he made about Fiji chairing the Melanesian Spearhead Group.

Ms Roberts will be leaving the country tomorrow.

I wonder what spin the green goons will put on these stories in the comedy sheet, the sun, tomorrow

The comedy sheet will have an idiotorial telling the few fools who buy the rag that bananasinpyjamas decided to cancel the MSG meeting because of political uncertainty in PNG.

No where will be mention made of the letter from Vila.

The illusion that will be presented in the comedy sheet is that bananasinpyjamas is in control and he has told the other islands not to come.

We will read the usual propaganda from the comedy sheet about how nasty Australia is. They will tell their foolish readers that the Acting HC was expelled because she suggested that the price of a can of Coke was too high at Fiji hotels.

The fact that bananasinpyjamas came back from Arab land with NO money wasn't reported; the comedy sheet just said that he had a good holiday.

I can't wait until the Australian travel advisory reflect the true situation in Fiji; no credible police, no justice, no law and order.