No one is saying a thing.

We know the Fiji military regime is unstable, but real instability starts to show when key members from the coup planning stage suddenly get drop-kicked ! 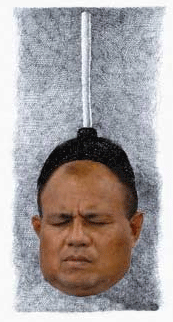 It is well know that Teleni and Salusalu displayed open animosity to Aiyaz and Colonel Mohd Aziz’s moves within the Military Council. Then suddenly they stopped getting invited to Council meetings and baboom, and then last week we get reliable word that Teleni is suspended – just like that - a victim of his own type of back-stabbing and warped fabrications of the truth ...

Word is that that senior policemen (Daveta and Tudravu) that Teleni has tried to expel from the policeforce, did leak some very serious allegations against Teleni and this has led to the current regime in-house crisis.

I asked a senior inspector recently for confirmation and all he said was "As he sowed, so will he reap" . Station constables have since been seen dancing on their counters with glee, but what has happened has Aiyaz Khaiyum's distinctive identifying characteristic's all over it.

However, as a recent commentator on one of the blogs said recently, it seems clear who is really driving the sunset-clause-truck into the Fijian people and the only one getting what he wants here is Aiyaz Sayed-Khaiyum- Minister for Everyting in Fiji !

Watch this space as word is there are some very heated arguments going on in regime corridors.

Posted by Discombobulated Bubu at 1:17 PM

Email ThisBlogThis!Share to TwitterShare to FacebookShare to Pinterest
Labels: Teleni suspended from duties

Good riddance to that barking salivating slob I say.