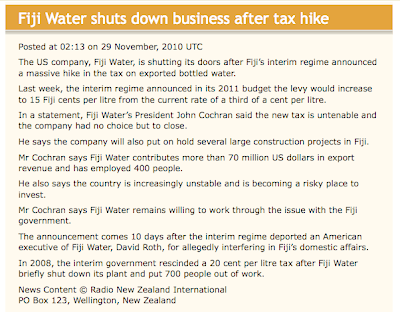 Link to the above article.

It was bound to happen .

With a regime that likes nothing better than to bully the populace and kindly investors that really do care about providing jobs and community support to the Fijian people, we will also say goodbye to the amazing image of Fiji that the brand that was Fiji Water provided gratis to the world. Not to mention the tax that this company paid that used to help our economy.

Wonderful publicity too - exactly the wrong kind - like this article on the Australia Network news :

" In a statement, the company's president, John Cochran .... says the tax is "untenable", and has left the firm with little choice but to close its facility in Fiji.

He says Fiji Water is the only company affected by the new tax increase.

Earlier this month, the company's external director, David Roth, was deported back to the United States for allegedly interfering in Fiji's internal affairs.

Mr Cochran says the closure of the company will have serious implications for Fiji.

"We represent more than $F130 million in export revenue for the country and employ nearly 400 Fijians at our facility," he said.

"We currently pay millions of dollars in duties and income tax. We also contribute over $F1.8 million dollars annually in royalty payments to the Yaqara Pastoral Company Limited and another $F250,000 annually to a trust that supports the six local villages surrounding our facility."

Mr Cochran says the move means the Fijian government is effectively "taking our business", and says it "sends and clear and unmistakeable message to businesses operating in Fiji or looking to invest there".

"The country is increasingly unstable, and is becoming a very risky place in which to invest," he said, adding however that the firm is willing to work with the government on the issue and says it may continue operating in Fiji if talks produce a satisfactory outcome."
______________________________________
THE CANADIAN BUSINESS MAGAZINE

Posted by Discombobulated Bubu at 4:07 PM

Just as the festive season is about to start, I feel for the 400+ employees and there families.

It is clear that the message the regime is sending out is that Investors come to Fiji at their own peril, which means that anyone investing in Fiji now has got to be a shining example of why you should avoid inbreeding.

Can't believe the stupidity of it all? For godness sake its wai not uranium - no shortage of wai in Viti - is however deperate shortage of naive cashed up American investors.