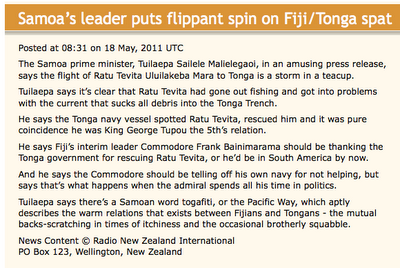 Talofa Lava PM Tuilaepa is always welcome on the Fisi Democracy Blogs, with his refreshing witticism, his latest badinage seeing global warming imputed to the hot air rising in Fisi.

We will remember that it was he who once advised Frank to stick to planting cassava and then called him a scrawny chicken.

In the same interview :

"And why does Fiji need an army for anyway", Tuilapea asked.

“Perhaps Bainimarama fears a combined canoe attack from Tuvalu and Kiribati, its closest neighbours. That must be it.”

“This is a region known for friendly people and its pristine environment- a paradise on Earth. Having a (interim) Prime Minister dressed up in army beret and full military garb is a bit ridiculous.”

Tuilapea says that he has been told that Mr Bainimaramna is part Samoan... that he has a Samoan grandmother.

“I'm tempted to go down to the Lands and Titles courts and look up his family genealogy in Samoa. Then I'll send for his family matai (chief) in Samoa and tell him to reprimand his long-lost descendent in Fiji. To give him (Bainimarama) severe censure for being cheeky, being ill-disciplined and having no manners."

And what of Bainimarama's People's Charter?

Posted by Discombobulated Bubu at 12:18 AM

Email ThisBlogThis!Share to TwitterShare to FacebookShare to Pinterest
Labels: Fa'aSamoa and Togafisi

Thanks for that summary of his great humour.

he certainly has bananasinpyjamas all summed up.