Lately, all ofa ta worlt, ta ratio and ta news has been filled with news of uprisings & ordinary folks taking to the streets to overthrow their long-time dictators.

Despite holding a deck-hand's position for a few years , one tictator in particular did not start out that way. He thought he was just another Aristotle before he kaba-waqa'd up the military stern and rowed his eensy-weensy waqa (up cassava creek) to his goal of countrywide superiority.

So, to avoid this happening to you, how would you realise if you are on the road toward despotic rule over your own duchy ?

Here is one of the warning signs, and we have decided to post it here for your own safety.

When another sovereign country sails at random into your waters and 'snatches' one of your citizens in danger of being swallowed by giant salala, print and distribute, quickly and at massive expense, THOUSANDS of GIANT GLOSSY photo posters of yourself to all the citizens of your enclave, declaring some kind of Campaign or anything else you can think of, so as to draw attention away from the other son-of-a-gun.

And hope that your loyal citizen's - or the makabuna's - do not draw all over it - like in this example (oh dear) : 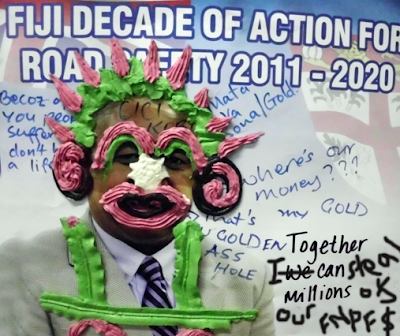 Posted by Discombobulated Bubu at 12:53 AM

Email ThisBlogThis!Share to TwitterShare to FacebookShare to Pinterest
Labels: How to tell you might be a dictator

Your makupuna may become highly sought after and overnight millionaires in these times D-Bu!

here are some details of your new home.

You may like to pack a few books to take with you.

I hope you like ping pong. Surely bananasinpyjams must be good at it after all his hospital trips to china.

Some business people are saying privately that they are ready to contribute money to the cause, but they don't want to be caught. They know that Bainimarama and Khaiyum are into revenge and pay-back.

@ Bob....when I was talking to a businessman (well known one) he said to me "the only sound investment in Bainimarama's Fiji is funding his overthrow- there are no profits to be made ina Banana Republic run by a two-bit military dictator".

I have heard that business people with investments in Fiji are interested in supporting Roko Ului. A lot of them still remember his father. They think if he's half as good as his father he can make a difference. Let's hope some of them do more than talk. They should put together a war chest so he can work up a serious campaign to return to democracy.