Time to disband the Fiji Army

Since 2006 the UN has frozen the bulk hiring of Fiji troops to serve on it's peacekeeping missions.

Today we see an article placed in the papers and over the radio by the regime propogandists to imply that the UN is almost desperate to have Bainidaramas drum up the numbers of soldiers needed.

And the lemmings all believe him ? And how pharisaical the last comment in this clipping ! 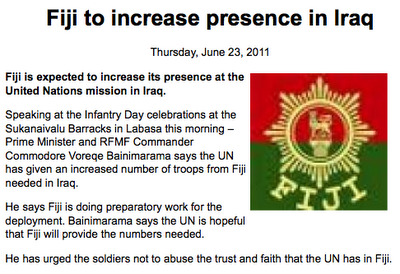 I say it is time the people of Fiji disbanded the Fiji Military entirely .

In an article written by Andre Vltchek author of political novel “Point of No Return”, he explains that the history of the Fijian military had seen it serving in many conflict zones as a UN peacekeeping force with some of its active or retired members contracted directly by foreign governments. He says , Fijian soldiers are very familiar with Arabs and their culture having served in Lebanon, the Sinai Desert and elsewhere.

"Foreign Security companies often directly contract retired Fijian soldiers who then serve in Iraq, Afghanistan and elsewhere and it is tremendous business.”

" It is a well known fact that Fiji is a major recruitment ground for mercenaries. But at home, the issue is taboo or at last free of criticism. With the money continuing to come back to Fiji, there is little public questioning. The Fijian military is ‘marketing’ not only its active duty soldiers and reservists, but also more than 20,000 unemployed former troops. Remittances are essential for the survival of many families where a soldier stationed abroad can send up to 2,000 dollars a month, a huge amount in Fiji, yet a great bargain for the UK or the US where the military personnel with similar experience employed in combat zones can easily cost 50,000 dollars or more a month."

He quotes Lieutenant-Colonel Mosese Tikoitoga, 46, senior goon in the junta led by Voreqe Bainimarama: "We made a conscious decision to create an army bigger than we need to generate foreign currency. Our economy has no choice but to build armies, and it's a good business… There are few other foreign investments. If we didn't do this, our people would be in the street creating havoc." He added that more than 1000 Fijians were stationed throughout the Middle East for private armies under the corporate command of Global Strategies, Triple Canopy, Armor Group International, DynCorp International, Control Solutions and Sandline International.

"For years, the Fijian military has been given carte blanche by the local population.

But now the price is being paid as the army brings its combat-zone practices and morals to the streets of Fijian cities and villages." 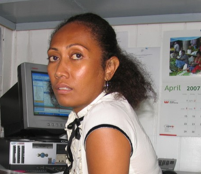 Shortly after the latest coup, the Executive Director of the Fiji Women’s Rights Movement (FWRM), Virisila Buadromo and her partner were arrested and taken to the military barracks. “I was threatened and insulted, beaten and humiliated”, she recalled. “Eventually, soldiers threw me on the floor and began jumping on my stomach. Since the coup I have been receiving anonymous phone calls; some of them openly threatening members of our organization with rape.”

"Outright opposition and outspoken critics are being intimidated and sometimes humiliated...... People are suddenly scared to speak out, to make a comment and be overheard by a passer-by....."

"After each coup d'état, the Fijian military took over the streets of the capital and began erecting roadblocks. There was no real use for the roadblocks, but that’s what the military had learned during its service in the Middle East and that is what it began implementing at home."

"Fijians went to war for money and eventually they stopped questioning whether their involvement in the conflicts was right or wrong. War became their lucrative business."

"What kind of society can be raised on such ethics?

What can one expect from an army that fights for a fee?

It was only a matter of time before it would bring its cynicism and twisted morals to the doorsteps of its own home."

It faces no external threat."

I agree Andre. It is time Fiji dismantles its military and removes this monstrous den of iniquity, of would-be wanna-be's and power hungry idiots.

We want to become once again the respectful, democratic and peaceful nation we once were and in harmony with each other and our neighbours.

Posted by Discombobulated Bubu at 4:30 PM

Email ThisBlogThis!Share to TwitterShare to FacebookShare to Pinterest
Labels: Time to disband the Fiji Army

The army is the vipers nest that has continued to breed anarchy and mercernaries that wreaks havoc on our beloved nation and its unarmed and innoncent civilians.

Fiji need a military as in any independent country. However Fiji does not need the current military that they have.

The mistake was committing Fiji military into Peacekeeping Operations and not keeping the selection and training in the high standard that Fiji Military was known for. The Fiji military was over worked and the focus or purposes of maintaining a Fiji military was overtaken by the need to generate Fiji foreign earning, thus the military has been sliding backwards and decaying in its very core.

The end result is a Fiji military more dangerous to the Fiji population and may be to the neighboring countries, then the values it contribute to the Fiji society and the regions.