Can We Expect Justice And Independence From Servants Of Military Dictators?

Here are some of the highlights in an article by Uvindu Kurukulasuriya in Sri Lanka in his take on the continuing decline of the professionalism and independence of the judiciary in that country, and the links to the same MO in Fiji ...

"Judges should behave within the judiciary as well as outside it in such a manner as to consolidate the confidence of the people. Judges have no private behaviour. It should be remembered that when oppressive, criminal, arbitrary, despotic actions are taken against the people by the executive or authorities,it is the judiciary that will be the guardian of the people." 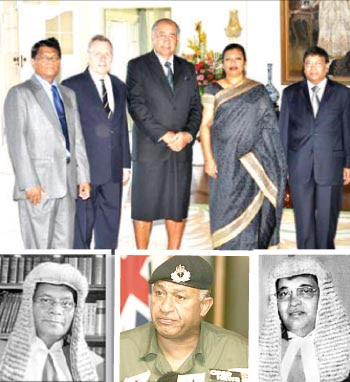 There is currently a prevalent sense of grave concern and apprehension, one may even say a degree of anxiety, in a section of the legal community that the deeply cherished values of judicial independence and moral integrity among judges are under serious threat and in a state of crisis..............

Servants of military dictators
The main issue here is the impact their Fijian jobs have on Justices Marsoof and Hettige when they are sitting in the Supreme Court at Hulftsdorp.

Can we expect justice and independence from servants of military dictators?

What is their judicial mentality?

What is their ethical compass in relation to the judicial function?

What principles of judicial independence do they adhere to?

Do they make a distinction between their Sri Lankan and Fijian judicial roles?

Can someone serving under a foreign military dictatorship, legitimately and credibly, sit at the same time on the bench of the Supreme Court of Sri Lanka?

What can be expected of judges in Sri Lanka who serve a military dictatorship elsewhere?

Some would say there is no difference between a military dictatorship in Fiji and an elected dictatorship in Sri Lanka. But others still have a hope about Sri Lanka’s Supreme Court and judiciary, because there are still judges who have been forthright and dispense justice without fear or favour.

Fiji is a country where there is no independence of the judiciary.

The Law and Justice Report issued by the Fijian Citizens Constitutional Forum found that 40 judicial officers were dismissed in the year to April 2010, in addition to the five recently dismissed magistrates.

“It appears that a government agency – which was purportedly established to fight corruption – is being used in a manner inconsistent with its statutory purpose. The effective dismissal of judicial officers attacks the independence of the judiciary,” he says. “Of most concern is those judicial officers apparently dismissed for rejecting prosecution cases brought by the military government or its agencies.”

“The state of the Fijian judiciary is a matter of concern, as evidenced by the fact that most expatriate judges, including a number of Australian nationals, have resigned or have refused to renew their contracts,” he said.

It seems judges in other democracies have refused to accept offers or who give judgments against the military government in Fiji are fired and they recruit judges from Sri Lanka whom they can control. That is the level of Sri Lankan judges. .....

Is it appropriate that a SriLankan Supreme Court judge (Sathya Hettige) should continue to have personal and social relations with the executive branch, especially of a government whose behaviour is extremely questionable from the viewpoint of democracy and the Rule of Law?

Why did he go to work under the Fiji military dictatorship?

How does his Fijian experience influence his high judicial role in Sri Lanka? .........
........... It seems the people of Sri Lanka must contend not only with Sri Lankan practices of corruption, but also with those who are influenced by foreign military dictatorships in the continuing decline of the professionalism and independence of the judiciary.

Posted by Discombobulated Bubu at 1:15 PM

Email ThisBlogThis!Share to TwitterShare to FacebookShare to Pinterest
Labels: Can We Expect Justice And Independence From Servants Of Military Dictators?