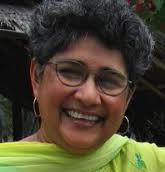 She says the Lowy poll is not a reliable indicator of support for Commodore Frank Bainimarama.

She spoke to me earlier this afternoon from Auckland, where she's attending the Pacific Islands Forum.

SHAMIMA ALI: I am quite concerned about the manner and the environment in which the poll was done and who did it; I have a difficulty with that.

MARK COLVIN: What do you mean?

SHAMIMA ALI: Because I don't believe this was the right time to do it and I think the people who commissioned the report also are not aware of the reality.

MARK COLVIN: This is the Lowy Institute.

SHAMIMA ALI: Yes. Which is about the fear, the paranoia which is present there. We actually don't have a normal form of governance there in the country so that alone.

MARK COLVIN: You're really saying that people who were polled might have been afraid to say what they really thought.

SHAMIMA ALI: Yes, I would say so because you know what, we're seeing on the ground is quite different from what the poll is suggesting.

MARK COLVIN: What are you seeing on the ground?

SHAMIMA ALI: Well we are seeing the intimidation, the public emergency regulations are in place and people are still being questioned and intimidated and taken in because they have said something somewhere opposing what the regime is doing, or for any comments that the members of the regime might find as offensive and so on.

And there is a fear because people are very scared to talk to each other and to talk openly; they talk in whispers if they have to say things like … if we're discussing anything political. On the phone we are very much aware of being tapped and so on. So the whole culture of fear is quite enhanced in Fiji.

MARK COLVIN: How ethnically divided is Fiji on this issue?

SHAMIMA ALI: I would say that the racial divide is a lot deeper and a lot bitter than ever before, despite the platitudes that are being spoken.

MARK COLVIN: So if there was a poll which you trusted would it still say that the Fijians in the majority were in favour of Bainimarama but the Fijians of Indian or Asian descent would be anti-him.

SHAMIMA ALI: Well they're not actually. No not at all but I believe that any poll conducted at this point in time would show similar results, for the same reasons that I have said.

MARK COLVIN: Okay but what did you mean by saying that the ethnic division was deeper than ever before?

SHAMIMA ALI: Well look a lot of people see this as a pro-Indian crew and I must say that many people on the extreme fringe, you know the nationalistic fringe, they see it as that, whereas people like human rights defenders and so on we just see it as the military taking over power and nobody benefits from that and we can see the results.

MARK COLVIN: You're saying that a lot of people think that the Bainimarama coup was a pro-Indian coup?

SHAMIMA ALI: Yes they did. I mean that was the thinking from the time that it happened but now people gradually there is an understanding coming about that actually everyone is being affected by what is happening in the country and there is a, how shall I say, there is a courting of the indigenous Fijians at the moment going on and the Indian people on the streets are saying well what about us now? Where are we now? And if you look at the Fijian civil service, if you look at the security forces, nothing here's changed.

If you look at the top levels and so on, it's still indigenous Fijians. The army, despite all the platitudes about equality and so on, the military hasn't made any effort to include Indo-Fijians in its ranks and so on.

But I would like to say that the racist fringe, the nationalist fringe is using that, because Fiji has never been devoid of racial politics.

MARK COLVIN: Now there are some Pacific islands which want a much softer regime in terms of the international community's attitude towards Fiji. Australia and New Zealand seem to want to keep up the existing regime; what should we do in Australia for instance?

SHAMIMA ALI: I believe there are universal standards of human rights and governance and so on, so of course I believe that people should be supporting Fiji in getting back to democracy and assisting Fiji to start preparing for elections and so on and I think people are waiting for Fiji to make the first move towards that; you know lifting the PER (Public Emergency Regulation), lifting the censorship and so on.

But I just think that we need to be held accountable for our action and I believe that people should come together to assist but not to encourage what is happening in Fiji at the moment. The encouragement should be to look at 2014, the preparations, lifting the PER and so on?

MARK COLVIN: And what about individuals; should people boycott the tourism industry or should people go there and take their money and hope that some Fijians will benefit from it?

SHAMIMA ALI: Well I think that's a matter of conscience for people; that's choice that people will make.

MARK COLVIN: Shamima Ali, executive director of the Fiji Women's Crisis Centre, speaking to me from the Pacific Islands Forum in Auckland.

Posted by Discombobulated Bubu at 12:31 AM