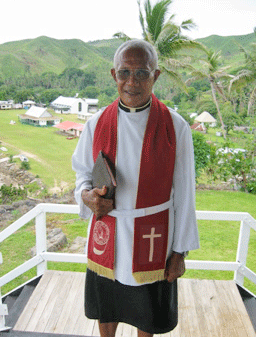 A senior figure in Fiji's influential Methodist Church has urged the country's soldiers not to obey the coup installed military government.

Former Methodist Church President Reverend Josateki Koroi, who used to be the army's senior chaplain, says soldiers are obliged to obey a legal government, but he doesn't believe the present one fits the bill.

He made the call by reissuing a seven page letter he originally published just before the 2006 coup which installed military commander Frank Bainimarama as interim prime minister.

Posted by Discombobulated Bubu at 9:44 PM