It has been a quieter week, thank goodness. But it has been a really enjoyable one for all that. There is no better sound than the death throes of all the political parties in Fiji. The sound of their whingeing and complaining is music to our ears and best of all hearing them bleat to Australia; followed up by the final death moan as they realize Carr Crash could care less.


I have spent some time with the True Leader Aiyarse this week. He is fascinating and good company, in fact he is fast becoming my absolute hero.

Grubby if you want to get back to the top of my most wanted list you will need to acquire some of Aiyarse’s better characteristics. Just to help I did some intense research into the matter. (In fact I just looked up Psychopath in Wikipedia.) 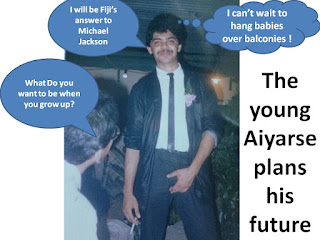 The Aiyarse attributes you need are as follows: Shallow Emotions , Coldhearted, Egocentric, Superficial Charm, Manipulative, Impulsive, Criminal, Antisocial Behavior, a Lack of Remorse, and a Parasitic Lifestyle. In fact looking at this list you and the True Leader are remarkably alike. The big difference is about 20 years and the belly size.


He told me right from a young age he was unlike his fellow students.

He knew what he wanted and that was to be in complete control of Fiji and then the world. He is about 5 years behind schedule but he plans to gain time by bringing the elections forward to later in 2013.

He will announce elections on Feb 15th when all the political parties have ceased to exist and lo and behold the only party will be the RFMF. Fiji will become the Pacific’s first Militocracy. He is so confident.

He was out shopping last week and he ran into one of the pro democracy bores in a shop. Without missing a beat he went up to the guy and told him in no uncertain terms that it was simply foolish to fight against the Government. He then lifted up his foot and said “You are an Ant and we are a Boot.” He stamped his foot for emphasis. How cool is that? I bet if you stood on one foot after of a few bottles of Cabernet Shazzer you would simply topple over.

He also has no shame when it comes to flaunting his parasitic lifestyle. He has been given the top of the range $325,000 Land Cruiser by Frankly Bananas. But to comply with the government vehicle decree it has a Government number plate during the week but during the weekend it has a civilian number of HB 361, so he is able to use it for personal purposes.


He was also telling me that one of his many perks and benefits of being paid $800,000 per annum through his Aunty Nur is that he does not need to pay tax. That is what I love about Aiyarse, FRCA are cracking down on the whole country except for him and the Glorious Leader. Hypocrisy is like a drug to him.

Don’t worry I put in a good word for both of us and your checks will continue to be sent to the tax haven of Vanuatu. My salary is paid locally and I pay taxes, but all my kickbacks etc get sent off shore. 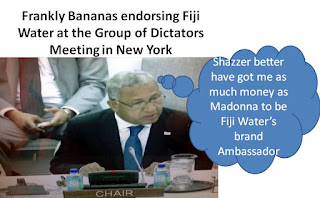 The Ministry of Finance is getting a bit nervous about all these payments. They have never received any written directives for the payments through Aunty Nur and so they feel their Arses are fully exposed over this. But I hear Filimoni WankaInTheBath, the Permanent Secretary, has taken to recording all his conversations with Aiyarse and Frankly Bananas. If he is ever called up to account for all these dodgy payments he will use that tired old excuse that he was only following orders, and then he will play the tapes. WankaGate could be a massive scandal we might have to cover up some time. Sorry I am forgetting I control the media so there will never be a scandal.

I did really well financially last week I set up a water product placement for the Chairman of GOD (Group of Dictators) inauguration. You would not believe how much Fiji Water paid for this picture. 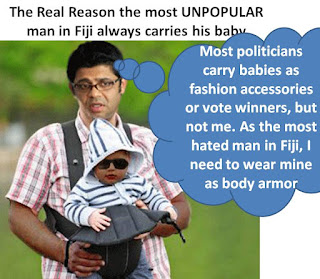 Aiyarse was telling me about his security. He is aware he is the most unpopular man in Fiji. As such he has been told by his bodyguards that he needs to wear body armor at all times. He has come up with a very discreet way to make sure he is well protected. It is something that he is copying from President Assad of Syria. 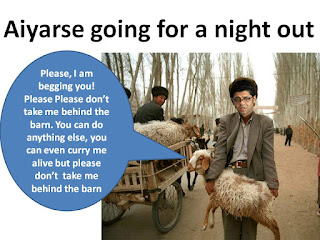 Although in public he is a happily married man he has a dark side as Her Majesty the Queen pointed out last week. But as he has no shame he is remarkably open about his sexual preferences.


Grubby will you be coming over later. All this talk about psychopaths has got me a bit you know. Please come on over and don’t forget to bring a bottle of strong voluptuous red Shirazzer.

Posted by Discombobulated Bubu at 7:12 AM