Is the Fiji Sun even a newspaper?
by Marc Edge

Bernard Lagan is obviously a very astute man. The veteran journalist and author only had to peruse the Fiji Sun's website briefly to get a flavour for the . . . er, publication.

In researching the torture video story for the online Global Mail in Australia, Lagan apparently decided to check out the coverage on some of Fiji's news websites.

What he saw at fijisun.com.fj obviously shocked him. "The Fiji Sun is a despot's dream," Lagan fulminated. "It routinely – and shamelessly – publishes news stories by writers within the country’s Ministry of Information." Well, to be fair, the Fiji Times does that as well. It's just that journalists for the Sun might as well be on Minfo's payroll. Some actually may be. Lagan decided to do a quick tour of the Sun's website to evaluate its coverage of politics. What he saw instead became the focus of his report, bumping mention of the shocking video down several paragraphs below his description of the Sun's shocking journalism.


"At lunchtime on Wednesday, on the paper’s website, the five top-placed stories all concerned the current tour of Fiji’s north by the Prime Minister, Commodore Frank Bainimarama. The tone of each would surely sweeten the most vinegary of government spin-doctors. The first headline read: “Why PM in North: Listening to People, Responding to Needs". Those following were equally heartwarming. Among them: “PM Hands Over Home”; “PM Promises New School Block”; and “PM Commends Military”. Most were accompanied by a rather wooden photo of the leader listening, responding, handing over or commending."

Lagan has only just discovered what those of us who read the Sun regularly have known for years. The once-proud daily relentlessly promotes the military dictatorship. It also vigilantly smears anyone who dares to even question any move made by the Bainmarma junta.

That's what happened to me, of course, as soon as I began speaking out against the appalling level of Fiji journalism and advocating for press freedom there.  Before long, I was gone from Fiji. Am I sore? You're damn right I'm sore. I'm about as sore as those poor bastards in the video. Does that mean I'm biased against the Sun? Maybe it does. It would be hard not to be after the kind of treatment I received on its pages. But I went to Fiji completely neutral on the issues that embroil the media there. I wanted to meet all the players and hear them argue their positions personally before I  made my mind up about anything. Sun publisher Peter Lomas and editor Epineri Vula were two of the first journalists I met there, over lunch at J.J.'s on the Park. (Peter picked up the tab.) 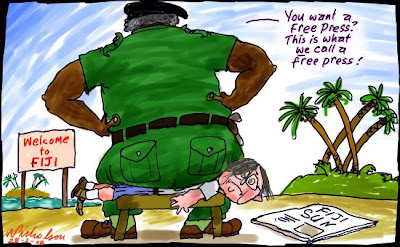 Lagan traces the Sun's demise as a serious news organisation to the 2008 deportation of publisher Russell Hunter after he dared to run a story about a minister’s failure to pay his taxes.

Quoth Lagan: "Since then, The Sun has shone more reliably from the Commodore’s rear."

Now it's Lomas who is sore.

"Your column on Fiji and the Fiji Sun is unfortunately a long way from the truth," Lomas protested in a comment on the Global Mail story. "You rely too much on Marc Edge as an informant."

There he is mistaken. I wasn't a source for the story at all. The first I heard of it was when someone unknown to me (not Lagan) sent me a link to it. The story merely mentions this blog favorably in its final few paragraphs.

Like me, Lagan was hard-pressed to find any coverage of the torture video on the Sun's website, noting that it had "pretty much managed to look the other way." Lomas claimed otherwise.

"The Fiji Sun had similar front page coverage of the "beating video" to the Fiji Times, despite claims by you and Edge that it did not. The day you refer to we had coverage and comment on pages 1, 2, and 3. It included the mother's tearful reaction and photo as the front page, just as the Fiji Times had. Anyone who makes claims such as you and Edge do is just plain wrong and out of touch on Fiji."

This has since been confirmed by some inside Fiji who have been able to follow the Sun's coverage in print, which raises the question of why those stories would not be posted online as well. 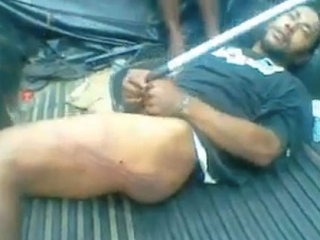 I have been able to find only one story about the video on the Sun's website, headlined "Police Speak Out," from 6 March. It led with police promises to investigate, then took issue with Fairfax NZ reporter Michael Field's first article on the "horrific" video, which broke the story worldwide. Instead of focusing on the brutality displayed by Fiji security forces, the Sun story jumped all over an error made by Field, whom it claimed "has a record of anti-Fiji reporting." (I would argue that he is instead guilty of anti-regime reporting, which according to the junta is the same thing.) Field reported that the video, which was first posted on Facebook before being removed and posted on YouTube, depicted the beating of prisoners recaptured after an escape from Naboro prison last September.
In fact, as if it really mattered, the victims were a prisoner recaptured after a subsequent breakout in November and his alleged accomplice. There was outrage expressed in the Sun story, by Shamima Ali of the Coalition on Human Rights, but it was buried at the bottom of the story.
This is less journalism than government public relations. It echoes the coverage by Quibbling Croz, who also mistakenly identified the victims at first as Naboro escapees recaptured in September before issuing a panicked correction. I can almost envision Croz and Lomas getting the same sharp phone call from Minfo pointing out the discrepancy.

The appointment of Lomas as Sun publisher in early 2009 brought a sea change in the newspaper's coverage of government. From a vigorous watchdog of government under Hunter, it suddenly became a devoted lapdog of the Bainimarama regime.

The blogs quickly noticed. "The Fiji Sun is sounding like someone who's taken a heavy dose of Valium," quipped Fiji Democracy Now in April of that year. The newspaper that had been named the best of the year in 2008 and once featured award-winning investigative reporting from journalists such as Victor Lal, had become strangely quiescent, noted Raw Fiji News.

"But all that has changed with the appointment of a new publisher, Peter Lomas, who has no doubt shown a liking to Frank's junta. Fiji Sun's content has not only become another boring one-sided propaganda newspaper for Frank but they have even gone as far as congratulating Frank's appointments."

Then came the constitutional crisis that led to the Easter Putsch that year. It included the imposition of martial law in the form of the Public Emergency Regulation, which installed censors in newsrooms and was only lifted last year. Even Lomas protested that, declaring in a front page editorial headlined "We ban politics" that the paper would no longer publish political stories of any kind. "When it comes to reporting fairly on politics," the statement pointed out, "journalists were severely restricted by the most recent directive from the government." That ban didn't last. According to the Guardian, Lomas and his editor were soon summoned by the regime. Before long a new Sun was shining over Fiji. "I remember that you commented that the Sun had to go back to ABCs of journalism soon after your appointment," a commenter on Coup 4.5 noted, pointing out the change of direction under Lomas. "Is bootlicking in broad daylight of the military regime Peter Lomas' theory of ABCs of journalism?"


A brutal military regime such as has been in place in Fiji for more than six years now could not exist without enablers like Lomas and other compliant "journalists." I put that word in quotes because, while Lomas and others may once have been faithful to reporting truthfully, they have obviously gone over to the dark side of propaganda. They are now cruising a one-way street on which there is no going back. They have crossed the Rubicon and are fully invested in the regime, which seemingly unravels daily. Should freedom ever revisit Fiji, they will have some amends to make and more, as the anonymous C4.5 commenter noted in no uncertain terms.

"And to Peter Lomas, Veejay Narayan, Riyaz Khaiyum and those who have chosen to jump into bed with the dictators, remember you will be judged by your Karma when judgment day comes. From your current and consistent action of bootlicking, you people have earned your passport to hell. "

Posted by Discombobulated Bubu at 7:33 AM

Great piece of imformation,you need to tell the whole world the truth about Fiji and all its behind the scenes activities.

I m a european man who had the chanse to experiment fiji prison life . After 8 months i can say that is a hoples place , i don t think that the world realy want to know about places like this.