If there was any doubt that Fiji was already a Police State, this was just buried by a landslide with the amazing statement recently issued by a Fijian policeman :


"Any political party or member found spreading lies to cause trouble will be charged", the Fiji Police Force has warned. Speaking to Fiji Sun yesterday, Police chief of operations Assistant Commissioner of Police Rusiate Tudravu hinted that they have "mounted a joint operation with the Republic of Fiji Military Forces to monitor political activities".

I wonder whether Rusi really understood what he was saying or whether he was told to parrot the current collective mantra that emanates from the Fijian dictatorship?

I am intrigued at how Rusi would truly define the value (of the "lies") of which he so boldly speaks.

The value would require both a purpose or worth,  and a beneficiary or receiver, and require answers to the questions

Collectivism is an answer to the first question.

It declares value to the Collective, and this is the group Rusi "belongs" to ie. the dictatorship - who are attempting to determine the standard of 'good' which benefits the group. 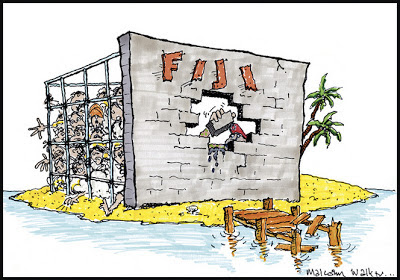 At the root of Rusi's pronouncement is the regime's belief that a Collective is more than just individuals interacting together. It is the belief that the group is an entity itself, more important than the sum of the individuals.

Mere citizens have become secondary to the Regime Collective.

Our well-being ,our opinions and our future hopes and aspirations are ignored if the group has something to gain (their superiority, their stay in continuous power). We see this in the decrees issued, & regulations and permits we are required to seek from the junta if we wish to gather together for political purposes, discuss anything that the regime might not want us to discuss, even to march down the street.

These have been formulated to suppress our rights and curb our freedoms as we individuals are not recognized nor respected. We are merely a tool for the group.

Collectivism as a concept,  perceives a group of individuals as having a single identity similar to a person, therefore considers itself to have ideas, able to think, has purpose, and then acts to achieve goals. It also has a personality, called culture, and can profess to have standards and principles the Collective should follow. Aiyarse Kaiyum is always arguing that it has shared rights, as well (just look at his daft constifusion).

Since the Collective is actually just individuals interacting, the Collectivists have to change their views of individuals, so they will morally evaluate people according to the results of the Collective. If the Collective manages to accomplish something great like for example secure  a Bollywood movie on Fiji's shores, or win the Sevens in Russia, united praise is showered upon the nation ... ie ( "we" achieved this and that etc) .

When the nation dives into economic decline, everyone else is to blame (including Australia, NZ and Samoa).

And if an individual refuses to acknowledge the superiority of his Collective, than he is a traitor and is eliminated. This is the result of Collectivism.

Collectivism demands that the group be more important than the individual. It requires the individual to sacrifice himself for the alleged good of the group.

I read somewhere that Fascism allows citizens to pretend that they own property, but they must use it in accordance with the wishes of the state. Since ownership under fascism means the ability to control a piece of property, the ownership is actually in the hands of the government.

More on this issue here .
Posted by Discombobulated Bubu at 10:17 AM

Email ThisBlogThis!Share to TwitterShare to FacebookShare to Pinterest
Labels: Don't mention the land