SUVA (Fiji), May 20 - "The Australian government announced Monday that it will provide more than 100 million Fiji dollars (US$54.1 million) in official development assistance to Fiji in the 2013/14 financial year, China's Xinhua news agency reported.

The previous financial year's allocation was around US$48.6 million.

"We're very proud to announce that for the first time this year we will be providing over 100 million Fiji dollars (US$54.1 million) in aid funding. This demonstrates the Australian government's unwavering commitment to the people of Fiji," said Counsellor for Development Assistance in Fiji, Joanne Choe. 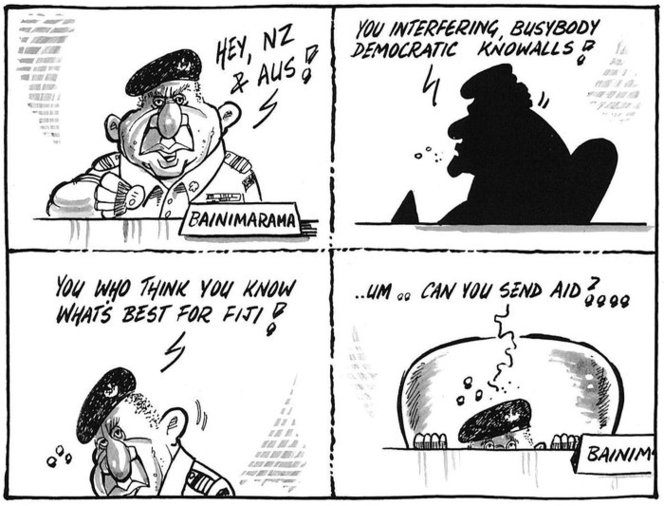 Managed from the Australian High Commission by the AusAID, Australia's aid programme is focused on reducing poverty and improving basic health and education services in Fiji.

"AusAID is helping the poorest children to attend school more regularly and working to see more babies growing safely through their early years.

"We're also helping to promote food security and increase incomes for poor families. With this increased allocation, we will be able to improve the lives of tens of thousands more people and to reach every province of Fiji," said Choe.

Bainimarama will however be claiming all the glory of course claiming to be the great benevolence-ator , and all hail to him as he will be the one to announce how HE gives out the books, the scholarships, the bridges, the roads and all the other goodies so he can buy the people's love.

Pfffft ! He may have muffled the local media but has another thing coming as we keep unveiling his regime's lies. Watch this space.
Posted by Discombobulated Bubu at 8:08 PM

Aust and NZ have been very good to Fijians and Baiarsehole and Aiyazsehole Inc. think they can discard our ties with them as they see fit. I don't think so !