Thank you FIJI GIRL for this article :

The thing that p***es me off the most about the Charter is the sheer hypocrisy of it. Chodo's Charter (yes, I blame him for it!) positively reeks of double standards.

For instance take this classic misnomer of a sweeping statement:
"Beginning with our colonial legacy of "divide and rule" and the institutionalisation of communal identities, our people have tended to identify more strongly with their religions, ethnicity and by their various communities or provinces than by nationality. Racially divisive leadership has contributed to the situation that we are now a fractured and fragmented society. We have tended to focus on the differences that divide us rather than on our common shared values and interests."

** Right, well. Guess who is THE undisputed KING of racially divisive leadership? At rallies and farmers' meetings where he delivers his most putrid divisive, splittist us-against-them rants, he doesn't even have the decency to say it in English or Fijian. Yes folks, it's all in Hindi.

In an earlier post by Fiji Girl, "Same s**t, different year", the late Sir Len Usher's letters were quoted where the great man himself points the finger at Chodo for exacerbating racial tensions for his own political gain.

Here's a another sasa-broom statement in the Charter

"Our problems today are deep­rooted and complex. We, the people of Fiji, must come together, join hands, and work together, to address all our problems."

** We hate to disappoint the authors of the Charter BUT Our problems are NOT complex.

They are very simple.

We have a legitimate Constitution and Chodo's bastards are raping it, our rights and freedoms, and our children's future. If Chodo's bastards would stop fussing and hold an election, our problems today will vanish into thin are. Nothing complex about it, and its roots only go back to December 2006.

Now how about this one :
"Our common and equal citizenship underlines our desire for more inclusiveness, mutual respect, a common national identity, unity, loyalty, social cohesion, integration, confidence, and belongingness to Fiji."

** Common citizenship and a common national identity does NOT equate with the idiocy of attacking the meaning of 'Fijian' and diluting it to mean any old Tom, Dick or Harriett who is lucky enough to own a skyblue passport. 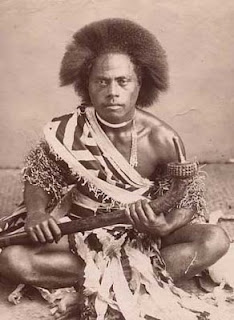 If Indians want to call their language 'Hindi', that is their problem. It doesn't mean we have to rename our language to 'Vosa Vakaviti'. My German friend is German. I don't call he Deutsch. A Frenchman is French, not francais. God help you if you call a Scot an Englishman to his face. Fijians are Fijians. Rotumans are Rotumans. IndoFijians are whatever they want to be called, as long as it ain't Fijian.

Here's another "utopian gem" :
"Our nation is in urgent need of genuine, trust­ based dialogue and peace building for which qualities of humility, compassion, honesty and openness to other views and interests are essential."
** If Chodo's style of trade unionism is anything to go by , it is the complete antithesis of trust-based dialogue. Honesty and openness don't even enter into the picture. He is an anachronism, a pimple on the bum of the international trade union movement which thrives on good faith, not the pretence of good faith which is Chodo's modus operandi.


"Our nation needs to urgently remove all unjustifiable systems, policies and programmes which are based on racial discrimination or narrow communal considerations."

** We did. It's called The Constitution.


"Our nation must have a freely and fairly elected Parliament that is representative of the people of our country to strengthen and sustain democratic governance."

** We have one. You bastards just won't let them sit down and get on with the jobs we elected them to do. (Although Mick Beddoes is doing a great job nevertheless with his consistent on-the-money comments against NCBBF and the illegal regime. Kudos also to Ro Temeimu Kepa and Mere Samisoni.)


"We strongly endorse that a holistic approach to human security be adopted by our Security Forces as the basis of the democratic state and the institutions for national security."

** We had possibly the greatest Police Commissioner in our nation's history, Andrew Hughes, who you bastards chased away. Lo and behold, crime and drugs are at an all time high.


"We must achieve the efficient and effective as well as sustainable utilisation of the nation's resources for our socio­economic development."

** In the words of the late Ratu Mara – Mahen, you crazy coot, don't even THINK about native land … This charter will fail. Not because the SDL may or may not talk to Methodists about it, but because it is inherently flawed. And because the people of Fiji, God bless us, are not fooled.

God bless Fiji.
Posted by Discombobulated Bubu at 9:35 AM

This is a very interesting (and I'm sure controversial to some people) blog. Good thoughts though.

Here's a site in Fijian that might interest you: