Michael our Archangel of Fiji

I was thinking in the weekend about Michael the Archangel after a prayer meeting with a few hard working Nuns who look after orphaned and abused children here where we live.

How Michael involves himself closely with the Earth and its inhabitants, as do all the God-centred Angels. How he works to bring the cleansing, reforming power of Light and Truth to us earthlings in the hope that when we can see the truth for ourselves, our lives will be enriched with joy, peace, hope, compassion, tolerance, understanding and Love. 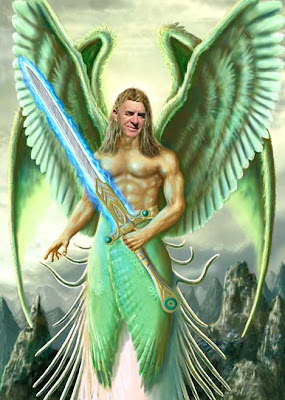 Whatever you call angels by any other name, throughout Earths history, Angels have ceaselessly offered their enlightenment to its dwellers.

The tendency of many to ignore, reject or fail to hear this offering only reinforces the darkness surrounding them.

We in Fiji have our own Angel Michael who gives us the wisdom and insight of his years of experience in his endless journey for truth .

This should be compulsory reading for all of Viti, and I would encourage you all to read Michael Field's review of "Ca Charter " Review which he posted on his website in the weekend. http://www.michaelfield.org/draft%20charter%20review%201.htm

Thank you and God Bless you Michael Field.
Loloma levu from Bubu and all Freedom loving Fijians.
Posted by Discombobulated Bubu at 12:07 PM

Email ThisBlogThis!Share to TwitterShare to FacebookShare to Pinterest
Labels: Michael our Archangel of Fiji

Right on Michael. He covers the whole lot and is is so onto it.

Sami should be ashamed of himself. $12,000 per month to write school boy drivel.

Now to top t all off Chaudhry backs out like the cunning snake that he is when we all know he was given the sack. A lie is a lie is a lie. Who does he think he is fooling ?

Michael was spot on when he spotted the condescending message inherent in the Charter .. that the Fijians are stone age and are inferior somehow to the writers of the charter.

The other thing that was worthy of attention of late is the SEDITION charge against that business man in labasa and the FT reporter. This was posted by IdiotSavant on his blog :
http://norightturn.blogspot.com

Last week, in the wake of reports that interim Finance Minister Mahendra Chaudhry had been secretly sacked, the Fijian police dragged in a journalist and threatened her with sedition charges.

Since then, the reports have grown, with the suggestion with Chaudhry would force his Fijian Labour Party to withdraw from the interim regime in order to avoid the humiliation of being sacked.

Now it's ACTUALLY happened, though Choudhry is denying it.

Which raises an interesting question: if it was the truth, is it still sedition?