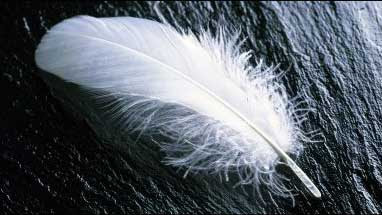 The single white feather is a symbol of cowardice.

Our boy Frankie Bainimarama is a disgrace to Fiji. He is a figurehead for immoral, brutish, corrupt and underhand practise and the people that subscribe to this dictatorship.

He has consistently denied and trampled on our rights as citizens and a nation and is denying our voice at the ballot box because he doesn't want to face up to responsibility. He and his team are totally without substance.

Like the thug he is, he has tried to shove the unwanted document (touted to be a substitute for our constitution) written by opportunist-has-beens down our closed gullets, and babbles about the rule of law while he totally disregards it.

To add insult to injury he travels the world in luxury while our hospitals cannot afford fuel and our children suffer because their parents have lost their jobs and cannot afford the basics. His lieutenants call us "nobodies" and "insignificants" and hide their members from justice that have killed our defenseless people - because - they have the guns and pretend they know things we don't.

With the guns they are very brave. Without, they are all cowards.

Let us send members of this regime all a white feather.

Email ThisBlogThis!Share to TwitterShare to FacebookShare to Pinterest
Labels: Symbol of cowardice

Some serious stuff coming from the Forum Leaders now ... Tonga and PNG leaders esp denying Franks assertions that they persuaded him to be persuaded . WTF!

And now we are going to be kicked out of the forum.

At the end of the day it is we the people who suffer the consequences of this illegal regime. For instance missing out on the seasonal workers scheme which could bring in massive amounts to our struggling economy.

I am sick and tired of these peoples crap!

Won't it be great to see white feathers fluttering out of the 4th floor windows and hearing screaming from inside.

Wasn't it in a pirate book that a white feather was left outside a pirate's door which caused him bad luck?

Let's hope it works on bananasinpyjamas in the same way.

BTW, when you are given a copy of the military charter, stick it an envelope, address it to bananasinpyjamas and mail it without a stamp.

That way, the jaundiced junta will have to pay double postage to get their garbage back.

Remember, the most frightening thing about the dribble is the entrenchment of the moronic military if Fiji's governance.

Good one ExFT. Fiji is sure to thank you for your tail feather contributions. God bless.


As I was placing my white feathers in envelopes to be airmailed to Suva, I thought of the serial that was on the radio back in the 70s and replayed many times; CHICKENMAN!

My thoughts went to your own self appointed hero who bumbles his way along pretending to crush evil but only creating chaos.

Or should that be:-

For those who have never heard the serial, listen to an episode at

Wouldn't it be great if a radio station in Fiji could replay the series.

It would be a great way for the whole nation to see the connection between a comical character and bananasinpyjamas.

I feel like couriering him 10 albino mynah's so he can (try) to get the point (doubtful tho' as he has a major tendency to being THICK all the time) ;)