Is Vore talking to God?

Today I am greatly disturbed to read this article about a tirade allegedly given by Frank to the villagers of Nabuyanitu where Frank says he has received divine instruction to carry out the coup (double click image to enlarge it).

In what is supposed to be a multi-cultural democracy, this raises some very important issues.

Which God was he talking to?

Surely not our Christian God (?!) as I cannot see how a supposedly humanitarian God would instruct a someone to embark on such a selfish brutish mission and inflict such a massive amount of economic and social destruction and misery on a country.

Did God also tell Frank to continually lie to the world about the path back to democracy?

Or just maybe, is this another pitiful attempt by Vore to exonerate himself of responsibility for his crimes?

By blaming his belligerent and murderous actions on a God, he is behaving exactly like a demented serial killer.

Some time ago, there was a documentary about John Scott's killer Apete Kaisau, (apparently aired in NZ again last night according to corespondent blogger Tim) in which Apete blamed his actions on a higher authority . Apete's defence was that God determined the being gay was wrong because he said so in the bible, so Apete seeing himself as the divine hand of God, took it upon himself to brutally remove John and Greg out of this world. 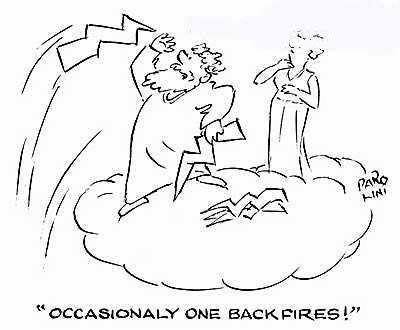 I will hazard a guess that it the same pattern with Frank Bainimanana and his nutty officers?

Vore's use of religion to justify his actions is vile and obnoxious to people of all faiths who do not see the hand of God in anything that has transpired since December 2006.

What about the families of the men the army and police have murdered ? Can Vore say to the families of Malasebe, Verebasaga and Rabaka face to face that it was God’s will that their loved ones were bashed and kicked to their deaths?

But perhaps I am barking up the wrong tree ........ Perhaps the higher authority Vore talks about is Satan who commands him to inflict such evil on people.

And to make mattters worse, it is Vore who levels accusations of religious passion on his enemies accusing the Church of being evil.

In reality, we all know that Frank Bainimarama clinging to power by the gun is no different to a terrorist killing in God’s name.

“Oh for shame, how the mortals put the blame upon us gods, for they say evils come from us, but it is they, rather who by their own recklessness win sorrow beyond what is given, as now lately...”
Homer – The Odyssey

Posted by Discombobulated Bubu at 11:39 AM

Email ThisBlogThis!Share to TwitterShare to FacebookShare to Pinterest
Labels: Is Vore talking to God?

There was a terrible calamity in Suva this morning when an engine fell off a jet and landed on the government buildings killing all of the jaundiced junta.

St Peter was sitting at the Pearly Gates when suddenly 30 souls appeared at once.

St Peter ran out to the throne room and sought out guidance from God. "The entire jaundiced junta from Fiji is here at once. What do I do?"

God told him to go back to the Pearly Gates and interview them individually and then make a decision on where they should go.

God replied, " What, the jaundiced junta has gone?"

After chodopu$$ got the sack from the jaundiced junta and the FLP disowned him, the Aust and NZ govts froze his bank accounts.

chodopu$$ had to work for a living now so he took up painting.

As we all know, chodopu$$ was very interested in
making a penny where he could, so he often over-thinned his paint to make it go a wee bit further. As it happened, he got away with this for some time, until the Methodist Church decided to do a big restoration job on one of their biggest buildings.

chodopu$$ put in a bid, and because his price was so low, he got the job. So he set about erecting the scaffolding and setting up the planks, and buying the paint, and yes, I am sorry to say, over-thinning it with turpentine.

Well, chodopu$$ was up on the scaffolding, painting away, the job nearly completed, when suddenly there was a horrendous clap of thunder, the sky opened, and the rain poured down, washing the thinned paint off the church and knocking chodopu$$ clear off the scaffold to land on the lawn among the gravestones, surrounded by tell-tale puddles of the over-thinned and useless paint.

He knew this was a judgment from the Almighty, so he got down on his knees and cried: 'Oh, God, forgive me; what must I do?'

And from the thunder, a mighty voice spoke..

'Repaint! Repaint! And thin no more!'

The methodists will be delighted with that one ! I would love to see there coment in relation to Vore's visions !

While stitching up the wounds of a 75 year old Australian tourist, who got assaulted by the Fijian police, the Suva doctor struck up a conversation with the old man.

Eventually the topic got around to bananasinpyjamas and his self appointment to Prime Minister of Fiji.

“Well, ya know,” drawled the old aussie, “this bananas fella is what they call a fencepost turtle.”

Not being familiar with the term, the doctor asked him what a fencepost turtle was.

The old farmer said, “When you’re driving along a country road and you come across a fence post with a turtle balanced on top, that’s called a fencepost turtle.”

The old aussie saw a puzzled look on the doctor’s face, so he continued to explain,

“You know he didn’t get up there by himself,

he definitely doesn’t belong up there,

he doesn’t know what to do while he is up there,

and you just gotta wonder what kind of dill put him up there in the first place!”

Bubu... I have to say publicly that you are one staunch, wise and beautiful woman! (That ain't a proposal :p) but when there ar so many ugly and deceitful people pushing their agendas, someone needs to congratulate you (and other Freedon bloggers!)

Why thank you Tim - you make me blush! But seriously we the Freedom Bloggers have the thousands of contributors like yourself to thank for keeping us on our toes and "in the know". In the emails received daily I see the people's will shining through every day.

How the regime can't or won't see their rejection by the nation is truly beyond me. In fact the innate graciousness and passive nature of our Fijian people is something they have taken for granted and trodden on for way too long.

Here's a letter from the "sisters";

Mister Bainimarama has been quoted as saying his actions before, during and after forcefully taking-over the people of Fiji's government on December 5, 2006 is because he was given a directive from someone of higher authority.

If this is the case, can Mr Bainimarama share with the people of Fiji when, where and how he had this directive given to him by this higher authority?

Did this higher authority also give him the directive to:

* Allow his military and police officers to torture and murder fellow Fiji citizens?;

* Forcefully fire top civil servants without due process and replace them with his "own kind";

* Pay himself and his military officers $184,000 while civil servants and ordinary citizens still have to live on their meagre pay?

* Give hand outs like new bridges, boats, new promises, the same time his draft charter is being pushed to the people, which in our view constitutes vote-buying?