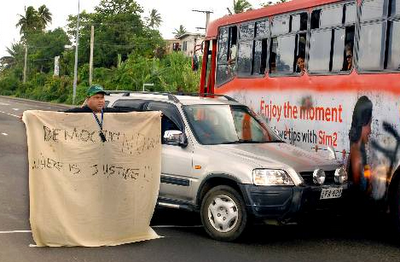 I was informed that our Freedom Movement Hero Vilisi Nadaku has been held for at least 6 hours being grilled by a sadistic policeman called Waisea Tabakau (SSP Director Operations).

I weep for the sheer ugliness and ungodliness this action portrays of the Fijian nation today. How weak and cowardly this regime is to question Vilisi without a lawyer being present and to deny his family the moral support that he deserves.

Fellow Freeedom Blogger SOLIVAKASAMA has the latest on their blog and the efforts of the Freedom Bloggers to get assistance to our very brave man Vilisi.

Contact me on veekaybee@gmail.com if you can offer any assistance in any form .... or email fellow blogger at solivakasama@gmail.com.

It is totally unbelievable that in this day and age, that a whole regime made up of 3-4,000 soldiers with guns would terrify this lone man armed only with his banner and personal belief. To Vilisi, we salute you my man ! God bless your courage and your stand ! Believe me, there are thousands of people who cheered for what you did and will support you in your hour of need.

Courage and blessings Vilisi !
Posted by Discombobulated Bubu at 10:42 PM

Our prayers and thoughts go out to tui in his moment of trial.

Jesus was also questioned by people who felt threatened in their position of 'authority'.

I wonder if injustice gates and the other 2 stooges can understand the silliness of their actions?

Can't they understandl that they have caused an uprising that will result in their demise?

From now on [ and especially if tui is hurt in any way] they might as well walk around with a target on their chest.

All this for a handful of silver.

What is needed now is for the nation to stop at 9am next ****day to protest the lack of democracy in Fiji.

Don’t gather in large groups where the sadistic green goons will use water canons, etc, but protest individually and where you are at the appointed hour.

Just imagine the effect it will have:-

* if every car, taxi, bus and truck came to a stop, the occupants got out at 9am, and everyone held up a sign saying “”DEMOCRACY NOW”"

The ripple effect of this silent protest would be enormous.

Fijians, you landed a giant blow to the illegal jaundiced junta when you stayed away from the Fiji Day mourning.

Fijians, Vilise landed a giant blow to the illegal jaundiced junta when he staged his one man protest.

Now it is your turn.

Is there a leader in Fiji, a chief in Fiji or another ‘Vilise’ who can take up this call and lead the protest?

Are their ministers, priests, rabbis, etc who will lead their flocks to take up this noble cause?

Are their trade union leaders who are willing to stand up for democracy?

Are there parents who are willing to explain to their children why they must stand up in class at 9am and hold up a sign saying “”DEMOCRACY NOW”"?

FIJIANS, you must protest!

Last nights TV in NZ on Shortland Street had two actors discussing going to Fiji for a holiday. There were remarks about the Military Dictatorship and called Fiji the “Zimbabwee of the Pacific” and only insane tourists would go. How far behind NZ is the program in Fiji?. Will it be censored? It was quite an eye opener as to how Fiji is now being treated as a joke in one of our main tourist markets.