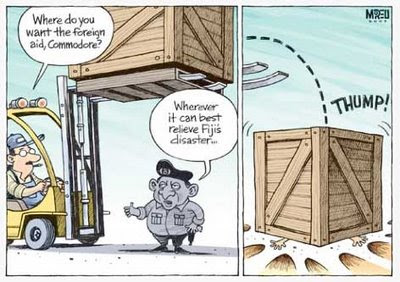 (With apologies to the cartoon artist who shall remain nameless in case he finds himself on the Fiji Gestapo's stasi list when next on a holiday to Fiji)
Posted by Discombobulated Bubu at 4:17 PM

Bubu, that is brilliant!

In 2 frames, it sums up so neatly the solution to Fiji's problems.

I note that chickenman, aka bananasinpyjamas, has chickened out of going to PNG next week.

He might as well go as he is doing stuff-all to help the people of Fiji at the moment.

When a natural disaster happens in Australia, the appropriate government appoints a qualified person to take charge of the relief operation.

In Darwin after a cyclone, it was a former Lord Mayor of Brisbane, Clem Jones, who was appointed by the Commonwealth Government to head the taskforce and he had the air force, navy and army awaiting his orders to implement the assistance needed.

The civilian population of Darwin was evacuated by aircraft whilst the clean up began. Military forces and civilian tradesmen were airlifted to Darwin to assist.

In Innisfail a couple of years ago, the former head of the defence forces was called in to co-ordinate the relief effort.

The same has occurred following most natural disasters in Australia.

All of the people chosen to lead the relief efforts have been people of integrity and management skills who had retired from their normal positions. This left them with the ability to apply themselves 100% to the task of rebuilding the community.

BUT, what do we find in Fiji after a natural disaster?

Almost 2 weeks after the floods, bananasinpyjamas and his green goons are floundering because they have got rid of people with experience and replaced them with fools.

bananasinpyjams is using the floods as an excuse to ‘chicken-out’ of the meeting in PNG as he is gutless and heartless towards the victims of the flood.

Surely, a ‘leader’ would be first to front up at a meeting like this to ask for assistance for his people.

Unfortunately, the whole world can see that this coward is only concerned about himself.

What a shame for such a wonderful country.

Love the cartoon, DeBu. Vinaka vaka levu. I pray that you are well and your relief efforts are bearing fruit. FEMlink Pacific had an excellent report out this week which you may find interesting in your relief work, if you haven't already read it.
God bless Fiji