A Man of Substance 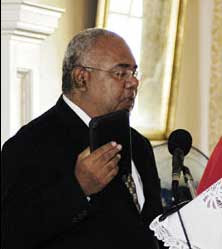 These letters are from some of these remarkable people about Rt Joni Madraiwiwi - a phenomenal Statesman of our time. (Letters to the Editor - Fiji Times ... end Feb 2009)

A man of substance

We refer to the criticism against Ratu Joni Madraiwiwi in your Letters to the Editor Column FT 26/2.

We do not comment on the specifics of the letter, suffice it to say that the letter says more about the writer than the person against whom it is directed.

Restraint is needed in such matters, especially during these troubled times.

A measured response would seem more appropriate for an institution charged with the promotion and protection of human rights, to allow for a genuine national discussion and debate about racism to take place in this polarised society.

He is a person who is deeply concerned about racism and human rights, and who ponders long into the night about challenges of building bridges between the races in this country.

His writings reflect that deep consideration and genuine love of all things in Fiji.

He is friend to both indigenous Fijians and Indian Fijians, one of the few true leaders of this country, capable of forging deep and meaningful personal friendships in the Indian Fijian community, as well as his own. We bear witness to this.

He is, to put it plainly, without a racist bone in his body.

We hope this letter offers solace to those of the wider community who know and respect Ratu Joni Madraiwiwi.

We write this letter in our personal, private capacities.

She offers guidance on racial and class structure and their collaborative effect on the anti-human rights agenda (it is a bit difficult to follow but I think she also advises that the media is one of the collaborators). Not having a doctorate in sociology or anything like that I am not, of course, in any position to pit my meagre qualifications against Dr Shameem's, so I need to look at things more simply.

I am quite sure that if I summoned the Indian staff of our law firm into a room and bawled them out for disloyalty using phraseology perhaps more commonly heard in the navy than elsewhere, there would be a letter on my desk from the Human Rights Commission in about 15 minutes.

Posted by Discombobulated Bubu at 1:20 PM

Email ThisBlogThis!Share to TwitterShare to FacebookShare to Pinterest
Labels: A Man of Substance