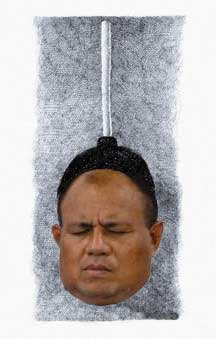 “Ei Prof, that liu-muri lasulasu Salulukaan was gonna explain to us but he's maraqe to my Jesus - but you know what is this coup-culture ? Can you explain it to us, or we will have to launch an investigation”

Professor Wadani replied, “OK I don’t have any time to explain it at my office, but if you come over to my house on Saturday and help me with my weekend project, I’ll be happy to explain it to you.”

At the agreed-upon time, the two showed up at the professor’s house. The professor stated that the weekend project involved his backyard lily-pond.

The two Common-ers both waddled over to the pond, and the professor handed them 2 buckets. Demonstrating with his own bucket, Prof Wadani said, “First, go over to the deep end, and fill your bucket with as much water as you can.” 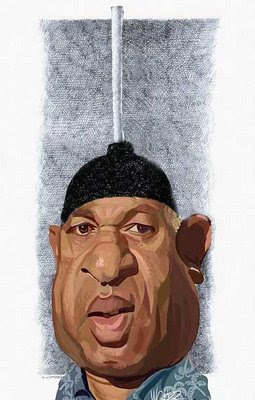 Prf Wadani continued, “Follow me over to the shallow end, and then dump all the water from your bucket into it.” The 2 men were naturally confused, but did as they were bidden with some reluctance.

The professor then explained they were going to do this many more times, and began walking back to the deep end of the pond.

Prof Wadani matter-of-factly stated that he was trying to make the shallow end much deeper.

Teletubby's brow creased over with confusion but when he saw the professor was serious, he figured that he would find out the real story soon enough - after all he had the power to sack the professor and hire another 200 just like him tomorrow.

However, after the 6th trip between the shallow end and the deep end, the 2 Common-ers began to become worried that the good Prof. was making fun of them.

So Bainirama finally burst out, “O karaiki - who started this ? We haven't moved forward. You are wasting valuable time and effort on this unproductive pursuits."

"Anyway whats this got to do with the price of salala ? Even worse, when this bullshit is all over, everything will be at the same level it was before, so all we really accomplishing here ish the destroying of what could have been really truly productive progress!”

Prof Wadani put down his bucket and replied with a smile, “Congratulations. I think you now understand the effects of the coup culture.”
Posted by Discombobulated Bubu at 5:28 PM

Email ThisBlogThis!Share to TwitterShare to FacebookShare to Pinterest
Labels: The Professor explains

Woilei - as if those 2 blockheads will ever understand.... but we can't say we didnt try. BTW Very good article by the Prof today about Teleni's God .

"THE latest reported remarks of the Commissioner of Police to certain police officers were inappropriate.

The audience were of a particular ethnic group.

They were vilified as a whole for the alleged conduct of a few. In the course of this rebuke, they were abused in another language.

The tenor of the entire episode was directed at their identity. The ultimate tragedy is that the interim regime and the Fiji Human Rights Commission chose not to censure the Commissioner's actions.

To who then are these officers to look for justice? What message does this convey to society?

Racism by another name does not make it less so."

God bless Ratu Joni, who will be our true President in the event of Rt Iloilo's demise. But, you can bet that Vore will be waiting to put that crown on his head, too. I hope it chokes him.
God bless Fiji