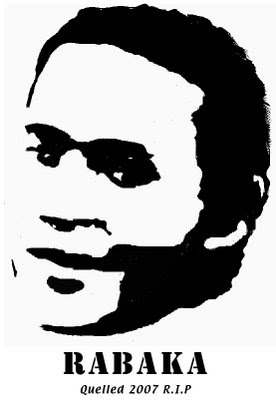 My heart has been tugged this way and that, this week with the tragedy that is of the fire victims this week in Victoria, Australia.

Some of the people that perished this week were some of the first to give to our flood victims when we hit the news overseas. I for one will never forget that they gave so freely only to die in an inferno a month after they poured their sympathies out for us.

What do you say? There are no words for needless tragedies such as this.

In the same breath I have been following with interest the court case of Rabaka's killers.

In the spirit of justice, I say that I ain't holding my breath in this case of the policemen/ soldiers before the courts right now accused of killing Rabaka - after all, corn can't expect justice from a court composed of chickens.

These people are terrorists.

Just like the arsonists that caused the needless deaths of 100's in Australia, both did what they did deliberately.

Both knew what the potential risks were and both caused colossal amounts of physical, emotional, economical and cerebral damage within the community and in the nation's consciousness.

Either way they are both the enemy within.
Posted by Discombobulated Bubu at 8:53 PM

"A nation can survive its fools, and even the ambitious. But it cannot survive treason from within."

I'm extremely glad that this is STARTING to come out (i.e. some of the gory details). Hence some of my vulgar comments I made a couple of weeks ago on both versions of Solivakasama against all those closeted homosexual/bisexual soldiers that seek to pass judgement on others but who haven't the honesty to fess up to their own shortcomings. Big joke aye macho macho men? And it wouldn't be the first time. Often is equally as big a joke to them to get some diminuative young guy hardly into his teens, such as the Indo-Fijian youth from Labasa whose now safely abroad to do likewise. Shame they do not realise that one day chickens may well come home to roost.
Cowards of the first order! no matter how hard they try to dress things up, just as is that champion of 'human rights' and pistol shooter Shaista Shameen.
Just as it is with the bullshit artist interim-AG.
F**kng pathetic specimens all! Shaista and Bubba: guardians of the moral high ground; fighters against the neo-colonial peril.
Let's be very clear. Those complicit in the downfall of the elected government in 2006 are terrorists. Often it isn't couched in those terms, and probably because those taking part - including a large proportion of that one proud institution the RFMF, are accustmed to abuse and abusing. Sad to have to say that, but all the more reason that those who still hold the RFMF's tradition dear should attempt to get it back to what it once was (about 2years ago).
Otherwise it may as well be left to disintegrate - which is an inevitable outcome.
What amazes me is that this junta really fails to see that the majority of people (globally - i.e. those that have an inkling where Fiji is) actually see through Frank and his apologists - why is it so hard for the junta to?
Fear, arrogance, thickness, some pathetic notion that any allies they have convinced will give them some sort of legitimacy. Ain't gonna happen if only because Fiji's status on a "world stage" is akin to that of Zimbabwe or Burma, and anything Frank or his hangers-on attempt only serves to reinforce that.
We all know what the cheap option is on how to resolve the issue. It's becoming increasingly evident.

Isa DeBu - Thank you for keeping the cyber fires burning for these innocent victims and their families. Let us not forget their blood was shed by the tyrants who seek to dominate us.
Let their memories entwine with our eventual Victory.
God bless Fiji