The Negative Nothing Concept

I was intrigued to read the following exchange in cyber space between 2 very intelligent blog contributors (Island Boy and Colin Bishop) on our Fiji Freedom solidarity site "Solivakasama".

I am no economic wiz but this struck a cord and the extremely sad sinking feeling that this is really happening to our beloved land and our people, many of whom ask only for the right to a simple existence.

The behavior of Fiji's military regime thus far has only worsened our people's plight, and in the light of the plunging world economic recession, will no doubt get worse.

Future Investors take note of what Mr Bishop has to ask in his last comment. This is a fact. The FTIB one-stop shop, the sweet talk, and all the fast tracking of investment proposals in the world won't halt the fact that between FIRCA and the military, any investment in Fiji right now in this hostile regime will be hounded and doomed by these guys.
______________

The $7 Billion in lost economic activity from the Coup, and I believe this might be a conservative figure, means that every man, woman and child in Fiji has had $8000 taken away from their lifestyle. Every villager or cane farmer knows he is worse off than before but probably is unable to put a dollar amount to it.

What I think is just as valid a point to consider is that the net effect of the loss, whatever the figure and basis of calculation, will have a much deeper and more detrimental effect on those at lower income levels.

This is not to belittle the effect on the well to do, but for me and the communities I am involved in, the loss of income and the loss of opportunity is not only more detrimental but is longer-lasting and just about destroys any real chance at recovery.

@Colin Bishop - The point I am reiterating is that the effects of the loss is much worse on those at or below the poverty line. 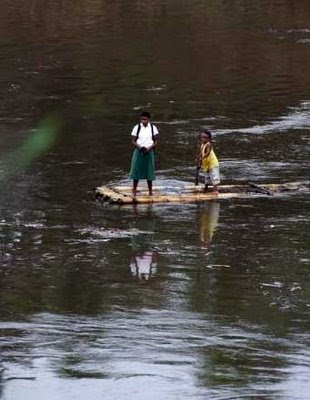 Never in the running for MENSA membership, I am unable to get my head around the fact that someone who was barely earning FJ$3,500 p.a. (the lucky ones) has just lost about $8,000 of that.

I don’t know how we arrive at negative nothing, but I can tell you that after the floods, I know what it looks like visually.

And to think, we once were considered the islands of sunshine and song!

For those below the poverty line it is the loss of “lifestyle advantage” that are in hidden assets like the standard of free medical services, monies available to NGOs for basic assistance and the loss of chances of employment.

Typing this I know it sounds like crap when I am looking at photos sent to me of the village of two of my staff.

It looks similar to what I saw in Vietman as a young soldier. I have happy memories of spending nights and drinking grog in what now looks like a war zone.

I have arranged for alternate accommodation for the two families and have allowed them to charge the materials to rebuild against the Company. The additional loss in this years books will be insignificant.

Does anyone else in Fiji notice FIRCA is now operating like a demented fox terrier and questioning every nitpicking item at nauseum?

Posted by Discombobulated Bubu at 9:01 AM

Email ThisBlogThis!Share to TwitterShare to FacebookShare to Pinterest
Labels: The Negative Nothing Concept

I concur with Colin in regards to FIRCA. In the same breath FICAC should be added to the category . I did find in my archives a letter that Graeme Leong wrote to one of the dialy papers in 2007 regarding busines in Fiji . It as as follows and what he says applies even today and even more so.
________

I OBSERVE that the latest victim of the so-called clean-up campaign is none other than Mahendra Patel, who faces charges of alleged abuse of office stemming from when he was chairman of the Post Fiji board.

The details of charges relate to extending the Chief Executive Officer's contract.

Mr Patel needs no introduction. He has a long and distinguished record of public service.

He has been decorated by the Queen and the French president for his contribution.

I carry no brief for Mr Patel. A person of his resources has access to the best legal brains and he is being ably represented but no one is above the law, including Mr Patel.

FICAC is seeking to criminalise business decisions that have been taken for reasons of commercial expediency.

In business, there is nothing unusual about extensions of contract before their expiry.

Similarly, payments of gratuity or "golden handshakes" when employment contracts are prematurely ended, are by no means unheard of.

Corporate chairs have a wide latitude and discretion to use their position to further the interests of the organisations they represent. There is nothing sinister in that.

It is a sad indictment on those responsible for the decision to prosecute Mr Patel.

It is also a pathetic reflection on this country that people who volunteer for public service are shamed and ridiculed this way.

We hear so much these days about moving Fiji forward and generating growth in the economy. How can we build any confidence in Fiji when the captains of industries and businesses are punished and demonised for entrepreneurship, innovation and success?

How can we encourage patriotism and productivity in this country when some of our best business brains are having to be second guessed in the decisions they take by inexperienced bureaucrats and police? Mr Patel's treatment will discourage many people from involvement in government statutory boards and committees.

The decision to prosecute him demonstrates a lack of judgement and wisdom.

It is not in the public interest.

It devalues the contribution of people who have spent a lifetime adding value to the "brand Fiji".

It will encourage a "Don't do"' and "Can't do" philosophy.

It will add to the increasing mediocrity of decision making in the bureaucracy.

In keeping with its constitutional responsibility to supervise prosecutions, the DPP's office should seriously consider intervening in this case.

I have already commented elsewhere on the dubious legal status of FICAC.

The decision regarding Mr Patel confirms that when the decision to prosecute is vested in the wrong authority, it is likely to be exercised arbitrarily, without the necessary checks and balances.

The finite resources of the state should not be expended on pursuing such hopeless cases.

In countries where their economics are booming, corporate and business people are recognised and applauded.

In Fiji, they are viewed with suspicion and distrust.

If the private sector is the "engine of growth" in the economy, the people purporting to lead us show every indication of wanting to shut that engine down.

What hope is there for this country when its most successful entrepreneurs are treated like common criminals?

This is not a recipe for progress and prosperity. It is a pathway for disaster.