Vinaka ragone for all your emails, thoughts and good wishes. Here are 2 of the most thought provoking letters for you :

My legal friends tells me that this is the way forward:

There IS ALREADY a constitution in place The President is appointed under the Constitution and he has no lawful authority to abrogate the Constitution or to dismiss the judges or to act inconsistently with the law as declared by the Court of Appeal.

The President should IMMEDIATELY name a Caretaker PM and take the country to elections if he is to save his reputation..

The President has, by his conduct renounced his office under the Constitution by declaring that he intends to ignore its requirements and make up his own laws.

That being the case, the office of President is arguably vacant and can be filled by the Great Council of Chiefs under section 90.

Although the Great Council is supposed to consult with the PM, there is no lawfully appointed PM so the doctrine of necessity must mean they can act without that advice.

Alternatively, if the President is unwilling or unable to carry out the Court of Appeal’s directives, he should immediately resign from office.

TO BE NON-VIOLENT OR NON-EXISTENT

In February 1959, four years after Rosa Parks sparked the Montgomery, Alabama bus boycott and 11 years after Gandhi was assassinated, Dr. Martin Luther King Jnr went to India to draw powerful lessons about the way the bony, bare-chested Gandhi had deployed the weapon of nonviolence in his fight to free India from more than 200 years of British rule.

50 years after that visit, Dr. King's son, Martin Luther King III, his wife and a delegation of civil rights leaders is in India to retrace his late father's footsteps.

In his many visits to various Indian sites where Gandhi's footsteps tread, museums and institutions, one important message he shared in a lecture at the Indian Council for Cultural Relations made good sense when we ponder about the current heavy-handed military dictatorship our country is sadly experiencing at the moment. He said,

"Violence is not always physical. It can often be structural and institutional and can breed the powerlessness, poverty, racism and militarism that his father battled against."

As I reflect on this Easter week's events of the abolition of our Constitution by the very one whose sole responsibility is to preserve it for our sake, the reappointment of the usurpers of our democracy, and the military-police state of affairs our media is in now and our country, one wonders how bold, inconsiderate, barbaric and really insane this military regime have become. 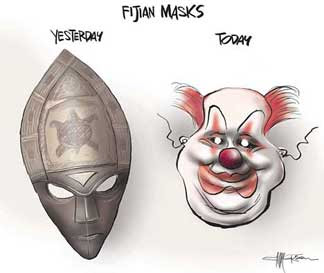 For the FHR("W") Commissioner to say that, the president's action of abrogating the Constitution is acceptable is just ludicrous, and even her other more intellectual lawyers said that.

So, you see people, the lame ducks are coming home to roost. They are rattled! And, the people should do more of the rattling…civil disobedience is the way to go…NONVIOLENT ACTIONS WORK!

Our chiefs and leaders should be bold and brave enough now to start making some NOISE NONVIOLENTLY! Workers should probably plan to walk off jobs enmass. I know there are really some frustrated and disillusioned military personnel everywhere...maybe you should be the ones to stand-up to your coward leaders first.

As in the message of Dr. King, and I quote:

"It's no longer a choice between violence or nonviolence in this world, it's NONVIOLENCE or non-existent."

Which one are we going to be, Fiji?

Good luck and God bless everyone!

And if you have any camera or cellphone footage to send , send it to PETER FIRKIN peterfirkin@gmail.com or Fiji Democracy Now : admin@fijidemocracynow.com

Posted by Discombobulated Bubu at 8:53 AM

Email ThisBlogThis!Share to TwitterShare to FacebookShare to Pinterest
Labels: Letters to the Fiji Freedom Blog Editors