High Treason in Our Fiji

If the family and people of Iloilo really loved him and cared for him, they would have prevented him from committing the worst sin a President can commit - that of treason against his own people.

To this end Iloilo has been sworn at, cursed and labelled in a manner most unflattering to his traditional rank and title - that of tamata liumuri, tamata lialia, tamata lakosese, tamata sesewa, tamata ba-kava ulusese. There is no dokai (honour) left and that is a truly terrible thing to behold in Fijian Society.

Instead Iloilo's wife Kavu and family, and Nacewa have chosen the love of false status and money over real filial concern & affection.

They should have let him out to pasture, but instead have let him become the hollow representation of the most evil we have seen in this nation; an international laughing stock; and the highest betrayer of the people he swore to protect. Justice was placed before him to follow but instead he and Franks thugs have chosen to kick it out & form their own self made justice which is a violation of justice & human rights right there.

These are the pirates of Fiji.

If one is looking for any positives, at least the charade and pretenses of the last 2 years have been ripped away from the white tomb stone, and the usurpers, judas's and stool pigeons can no longer hide behind the supposed righteousness of upholding all the right & proper edifices. 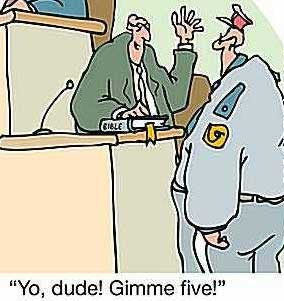 To make matters worse we held our collective breath in horror and covered our children's eyes when we saw the parade of rapists of freedom in Fiji at the swearing in ceremony on TV on Easter Saturday.

There was no veidokai in what they were doing.

Raising their hands and swearing on the holy book - each of them sounded and looked hollow, meaningless, shallow and hypocritical. Like Alice in Wonderland, all of them in a make-believe situation.... nothing real or true in this most sinister and futile of military maneuvers.

What were they swearing to on the holy books? Blasphemy if you ask me .. swearing to be loyal to a lie and to do every manner of evil, violence, deceit & injustice to the people they are supposed to protect.

We have arrived at a very sad place in our history.

"Where there is no respect for the rule of law why would people want to invest in Fiji? In these these times of global financial crisis financial investment needs political stability and there is no stability, people will invest somewhere else."

As far as the ordinary Fijian is concerned our beloved constitution still lives on , as Iloilo never had the authority to abrogate it, and ever the optimist, I say the thousands of us that believe in the protection of our fundamental freedoms are like smile-inducing, rainbow-coloured specks of hope who retain this belief in our hearts and minds, which no gun or oppressor can ever squash.

Our brightest rainbows today have been Fiji TV and the Fiji Times who have refused to run the news because of interference and heavy handed censorship. To Fussell and Rika and their staff we applaud you for the courage of your convictions.

What can we the people do to support you ?

Practically all we can do is to try and galvanize the rest of Fiji into standing up for our beliefs, our refusal to stay silent & to stand our ground against our new fascist order.

Tomorrow I have a list of practical things we can do in order to help us along the way. If you have any suggestions or news or letters to publish that Lewensky and co are afraid of seeing, please send it through to me at veekaybee@gmail.com or any of the other Fiji freedom blogs so we can broadcast them to the world.
Posted by Discombobulated Bubu at 10:33 PM

Email ThisBlogThis!Share to TwitterShare to FacebookShare to Pinterest
Labels: High Treason in Our Fiji

Keep up the good work.

Just because Iloilo says the constitution has been abrogated, it does not mean it has. Here is a bit of recent history to consider: http://www.michaelfield.org/fiji%20constitution.htm

Dbu,
I could not have said it better. Let us stand up together and say NO to this insanity once and for all.

To the saner thinking people of Fiji, send your info to any of us Fiji Freedom Blogs and we'll post it up there for the world to see!

THE TRUTH FROM SOMEONE WHO KNOWS

by the former Minister of Foreign Affairs - Australia, The Hon. Alexander Downer***

Two of Fiji’s politiciaans - if you could call them that - are particularly nasty.

One is the former prime minister, Mahendra Chaudry.

The coup came in 2006. There we were desperately trying to stop the coup and who was out there undermining our efforts? None other than Mahendra Chaudry. Chaudry subsequently became the so-called finance minister in the new dictatorshiip.

The other nasty piece of work is Bainimarama, This man is, to be a little rude, a clown. I know him moderately well. He’s irrational, a crank who thinks only he can lead the country and without any knowledge of policy issues. Far from saving the country, he’s wrecking it.

Bainimarama came to the 2007 Pacific Island Forum professing he would uphold the Fijian constitution and hold elections by March 2009. Under questioning from the then New Zealand prime minister Helen Clark and me, he revealed that he’d never even read the constitution.

Last week, the Fiji Court of Appeal said his coup was illegal and demanded that a new interim government be established pending further electiions. So what did the power-crazed dictator do? Sacked all the judges and abolished the constitution he’d never read! Now Fiji has no judges, no constitution and a leader wih no common sense or common decency.

Its time to rise up and kill these bastards. One shot, one kill at a time. Whilst some may disagree, this is the only quick and definite way to end the misery that we and our children have had to endure. Frank, Driti, Teleni and the rest of these clowns are not real soldiers. I want Fiji to be the way it was, the way the world should be.

Kai, censor this if you have to but enough is enough.

Great point, DeBu. If a man is unable to prove himself mentally capable of rational, independent thought, is he still rightfully President?
Personally I would love it if there were a clause for mental capacity in our 1997 Constitution but somehow I doubt it. The argument may need to look into other historical legal precedents from abroad.
So, since the President's capacity is questionable, is his decree legally binding?
God bless Fiji

I pity Iloilo's grandchildren - the example their parents have set does not bode well for their future, or indeed future generations who'll see these morons as setting an example that will be a real challenge for them not to follow.
Perhaps when they all finally get their dues, some of their ill gotten gains might be confiscated and used to educate the future generations including in some pretty basic principles of compassion.
Alex Downer summed up some of the morons' attributes admirably. Earlier on Helin Kluk! simply referred to Frank as a madman.