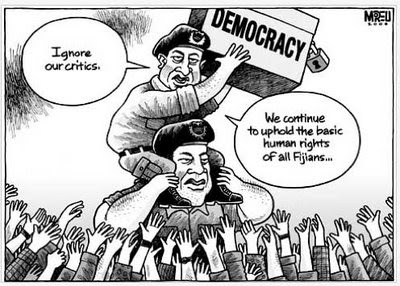 Hmmm what do we have to look forward to this weekend ragone ?

And before I wish you a happy weekend, thanks to a correspondent's email link, listen here for the remarkable interview with Ballu Khan that was aired on NZ TV this morning. Good on you luvequ for speaking out .
Posted by Discombobulated Bubu at 3:29 PM

Fiji's finances are already dire, with cash reserves running extremely low and the Reserve Bank moved to limit withdrawals and devalue the currency to help bolster exports and as several people have suggested I agree that action that takes a heavy toll on Fiji's economy targeting our biggest earners - tourism, income from aid and peacekeeping missions, should be priority now

JB said today that aiming for a direct hit on tourism is the most powerful weapon of persuasion Australia has.

'You need to come down hard on travel advisories for tourists, telling them to stay away from Fiji,' he says.

'Yes, it will hurt the local people, but in the end it will ultimately help them out of this terrible situation.

A New Zealand commentator, renown journalist Michael Field, agrees, saying tourists should be told it's too dangerous to go there, to stop the flow of income.

'It's a strange way to holiday anyway, knowing those who are serving you are poorly paid and worried about their relatives because of (the regime),' Field says.

Baledrokadroka says Canberra must also consider how it could exert some pressure on Bainimarama via China, which had developed financial links with Fiji.

'Australia supplies billions of dollars of raw material to China and it should use that as political leverage to convince China not to come Bainimarama's aid,' he says.

'That way Fiji will be forced to admit defeat.'

Jenny Hayward-Jones, South Pacific specialist at the Sydney-based think tank, the Lowy Institute, says Australia needed to enter talks with China to ensure it was giving money through proper channels.

'China should be convinced to direct assistance through the international financial institutions ... rather than bilaterally,' she says in a policy brief.

Others recommend limiting the military's income by putting a block on the use of Fijian soldiers in international peace-keeping missions.

Professor Brij Lal, from the Australian National University, says the United Nations must take some responsibility for the strength and relative wealth of Fiji's military force.

'The UN must stand up and take a careful look at what they are doing, which is essentially condoning a military coup by giving them all work to do,' Lal says.

'They are keeping them afloat financially. That's not right.'

Lal also supported lighter sanctions, like banning Fiji from sporting competitions and cultural events, but says care must be taken with broader moves like limiting tourism.

Commentators agree that all external moves to force Fiji into submission must be matched with more work from the inside to bring about change from within.

'We can talk about squeezing them here and there,' says Fraenkel,

'And that will definitely get some results.

Vinaka DeBu. One small correction - we DO have a Constitution which is still legally binding. The problem is that the current regime is acting as though it is not there. But it remains valid, despite the illegal government's refusal to recognise and enforce it.
Thank you Ballu for speaking up. Perhaps next time you can graphically describe what Vore did to you, said to you, so that people can REALLY understand what a 'complete nutter' he is.
God bless Fiji