The rate at which The most honirable, his elexensi, his majesti Common-dor LMAO, FFS, BDOE and OFB, Voreqe's Military shoes have to be replaced with new or rebuilt shoes varies widely under diverse climatic conditions.

(Sound of birds tweeting) ..... In the tropics of the SouthPacific, however, two pairs of shoes last, on the average, only five months, especially if the Commondore needs to run very fast down tapioka laden slopes under stress inducing mortar and gunfire..... (sound of heavy tweeting) 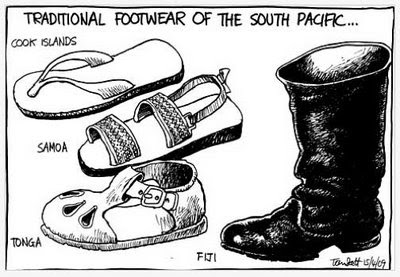 The replacement rate is not constant. It varies with the terrain, the weather and the type of warfare, and many other factors. It must be estimated before he and his loyalist troops even land on new territory such as in the hills of Naitasiri ... (sound of weeds tweeting) or on the porches of Methodist Churches or even within the confines of the Hot Bread Kitchen stores.

It must be revised constantly to reflect actual requirements. Nine years ago in the Veiuto Theatre of Operations each soldier required, on the average, two new pairs a year.

By the events of 2002, this requirement had doubled and changed with the character of military operations with the main operations of the junta having moved northward toward the tiled & comfortable corridors of government buildings, indeed you could say ah- ah- ah- - uhm , our hard working men are easing their way out of the jungles and into more corporate climates.....(sound of tea ladies tweeting) In this paradigm shift, the soft soled boot will replace the jungle boot.

The distribution system for supplying soldiers at fighting fronts is like a pipeline to and from Div Damodar's back entrance ... (sound of pathetic tweeting). And it must be kept filled with enough widely varying sizes of shoe- from size 3 for Talei MatavaHari ...... (please use HEAVY air brush on tweety image) to size 15 ½; from quadruple A to sextuple E width for someone like his lordship, the esteemed hard conking Police Commish Telenisona ... ....

The Quartermaster supply point must not find itself all out of the most common size-9D-and at the same time loaded up with odd sizes like 7AAA or 13B. Those are, by the way, oddly enough, the sizes of the kosa balls now stored in case of hard times coming soon.... ...... (images of Kanala Diripi signaling tweeting Army truck into supplies area loaded with kava root)

It is envisaged that in Suva soon, Regime corporals with the aid of ten cobblers imported from Mumbai and China will be soon repairing more than 4,000 pairs of shoes a month for Army personnel - we estimate that this will not only assist in employment growth figures for Meli Bainimarama's stats dept, but we will be returning to service every month more than 10,000 pairs of shoes for junta personnel in the Army, Navy, FICAC, FIRCA, FNPF, AG's office, the Juidiciary, and not to mention at FIU an estimated saving of 30,000 square feet of leather....(sound of Mary Bainimarama tweeting)

These figures do not include upwards of 4,000,000 pairs of repaired, salvaged, and unserviceable shoes which are not suitable for further military use and have been made available to various agencies for distribution to needy civilians that make up the 40 % of our population in squatter settlements and Sir AhNaDa Koy's villages on Kadavu.

END .. (And this brings us to the end of our first garogaro hour. Join us again same time same place tomorrow .. tweet tweet.)
Posted by Discombobulated Bubu at 11:54 AM

And ...... a delegation from Australia and New Zealand comprising members of the Maori Party and Greens, relatives of the Chodo-kin, and the Fair and Balanced enterage from academia and journalism will soon be on siteto advise us on the most soothing tweets in our future broadcasts - and ALL at their own cost. We must pay homage!

They're all twittering amongst themselves as we speak, and all in the name of DIALGUE. See! we DO CARE! Dialogue you can depend on!

Great post, DeBu. LMAO. To be honest, I can't wait for the illegal regime to launch their own TV station. Then I can, in the privacy of my own home, indulge my unquenchable urge to 'censor' them, using the 'OFF' button on my remote, and the 'Channel +' button. They want to censor the media? Now the entire country gets the chance to censor them back. Maleka saraga!
God bless Fiji

Ten outta ten for this one.