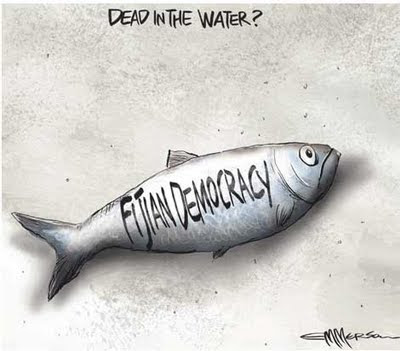 Fiji's future in hands of its people

At least two factors must be in place for a country to be subjected to successive coups. The first is the presence of a military force with ideas above its station and little time for notions of democracy. The second, and more important, is a populace that is fatalistic about the loss of its rights and threats to its well-being. So it is with Fiji.

Four coups within the space of two decades have engendered little outward antipathy towards military rule. Some say this reflects a traditional subservience, the product of centuries of oppressive rule by chiefs. But whatever the reason, it was fully appropriate for the Niuean Premier, Toke Talagi, to tell the Fijian people that they had a responsibility to secure the fate of their own country, and to "rise up to challenge" Commodore Frank Bainimarama's regime.

Mr Talagi, speaking in Cairns as the outgoing chairman of the Pacific Islands Forum, noted there was little that could be done to quell a mass uprising. "I wonder whether people realise you can't shoot 500,000 Fijians if they're rising up peacefully."

He was not, he said, advocating violent protests, but believed Fijians now had to take matters into their own hands for their children's sakes.

His speech attracted some odd responses, not least from New Zealand's Prime Minister. John Key described it as unhelpful, and concluded it effectively proposed trying to right a coup with another coup. "You can't have a good coup and a bad coup," he said.

Obviously, the death earlier in the week of the former Philippines President, Corazon Aquino, and the many tributes to her, had passed Mr Key by. The success of her "people power" movement, which in 1986 swept away 20 years of brutal dictatorship by Ferdinand Marcos, was the very model of the activity proposed by Mr Talagi. It inspired political change around the world, and should inspire the Fijian people.

At the moment, most remain passive. They have not reacted to Commodore Bainimarama's ongoing removal of their democratic rights, including the abrogation of the constitution, or the squashing of dissent, most recently through the arrest of a number of church leaders.

They have not responded to his refusal to meet international deadlines for the holding of elections, which has led to the suspension of badly needed foreign capital and aid, the application of sanctions, and pariah status for their country.

It appears those sanctions will have to extract a far bigger toll in human suffering and the economy to deteriorate further under the regime's foolhardy policies for unease and unrest among Fijians to grow. If that is what it takes, so be it.

Mr Key says encouraging dialogue between Commodore Bainimarama and other political players in Fiji is the right course of action, "not some sort of uprising of the people". Unfortunately, the regime has shown not the slightest inclination to heed that encouragement. Universal international condemnation of the regime has been disregarded and pledges dishonoured.

The latest casualty is a Commonwealth demand for elections by September next year. The commodore's self-appointed deadline, which keeps slipping further into the distance, is now 2014.

No one, least of all Mr Talagi, is suggesting the Fijian people stage a violent revolution. A peaceful solution must be found.

But that does not preclude widespread demonstrations by a populace no longer content to be ruled by a clutch of military officers.

The regime has shown only a willingness to sacrifice the well-being of the Fijian people. Worse is probably still to come.

At some time, the people must abandon their fatalism. They will have to send Commodore Bainimarama and his cohorts back to the barracks - once and for all.

Posted by Discombobulated Bubu at 1:27 PM