By MICHAEL FIELD
A major British legal group has declared that the rule of law no longer operates in Fiji.

The Law Society Charity says in a just published report that there is no peaceful and lawful way to challenge Fiji's military regime. 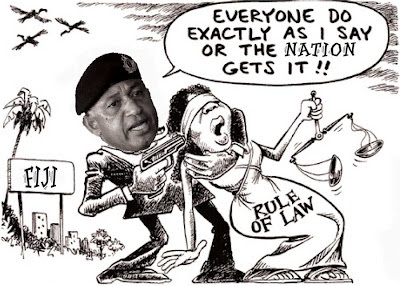 There is no democracy and the independence of the judiciary cannot be relied on, they say in a report Fiji: The Rule of Law Lost, the Charity considers the effect on the Rule of Law in Fiji of the events of 2009 and beyond.

It said the office of the Director of Public Prosecutions (DPP) has had its competence and independence reduced to an unacceptable level and that regime controls and restrictions make it virtually impossible for an independent legal profession to function appropriately.

The group, set up by the Law Society of England and Wales, noted that the United Nations tried to investigate the rule of law in Fiji in 2009 but were denied entry.

The charity's chair, Nigel Dodds, made a private visit to investigate last November.

Since his investigation Fiji dictator Voreqe Bainimarama has lifted the martial law he imposed in 2009, replacing it with new forms of control.

The charity noted that there is a notice posted to the walls of the courts stating that "no proceedings challenging the constitutionality of the Government's acts can be issued."

It said the DPP, Josaia Naigulevu, was dismissed along with the judiciary in April 2009.

The most recent appointee to the role of DPP is Ayesha Jinasena, a Sri Lankan on a two-year contract.

It said the DPP and the Fiji Independent Commission Against Corruption had been taken over by the newly qualified and lawyers imported from Sri Lanka.

Jinasena was sacked and ordered to leave Fiji in November due to "lack of confidence by the police".

She was replaced by New Zealand lawyer Christopher Pryde.

"The quality is held to be variable. Maintaining independence from government in their position must be difficult," it said.

The Charity noted that the judges dismissed in April 2009 were given no reasons, no notice, and no compensation for loss of office.

"It is apparent that their sin was to comply with their oath of office and to act independently rather than any misconduct," said the Charity.

"It is difficult to conceive of a more obvious attack on judicial independence."

The military rule had removed the Fiji Law Society of the power to register lawyers, with the power given to the Chief Registrar, who was military appointee, Major Ana Rokomokoti.

The removed the Fiji Law Society files after threatening to arrest staff if they did not hand over the files.

It is interesting to note that on the bottom of the UK Lawyers Gazette , this comment appears by a John Connors :

Fiji: The Rule of Law Lost by Dodds

Where can I obtain a link to the report or a copy of it please?

Posted by Discombobulated Bubu at 3:44 PM

Email ThisBlogThis!Share to TwitterShare to FacebookShare to Pinterest
Labels: No law in Fiji say UK lawyers


Foreign minister designate Bob Carr has rejected media reports that he is planning to soften Australia's hard stance against Fiji.

Both Mr Carr and Mr McCully greeted the announcement with caution and said time would tell if the Fiji's rulers were truly moving towards democratic elections.

The former New South Wales premier also says he will be seeking more information from the ACTU about the human rights situation for workers in Fiji.

Mr Carr says he wants to further investigate claims that any union official who speaks out against the interim government still risks life imprisonment.

"Certainly one of the tests we'd consider in the future is the right of organisation in the workplace," he said.

"I'd expect to have more conversations with unionists, in particular the ACTU."

Mr Carr said his hour-long discussion with Mr McCully about the region was wide-ranging and helpful.

He will meet prime minister John Key on Saturday morning.