In October 2010 the International Budget Partnership released the Open Budget Survey 2010, the only independent, comparative, regular measure of budget transparency and accountability around the world.

Produced every two years by independent experts not beholden to national governments, the report reveals that 74 of the 94 countries assessed fail to meet basic standards of transparency and accountability with national budgets. This opens the door to abuse and inappropriate and inefficient use of public money.

Fiji's report ...  is just plain damning and shows an incompetence of the highest order. 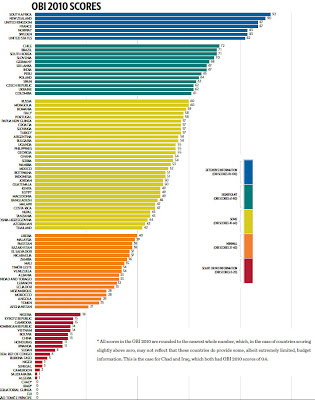 If you can't see Fiji .... isa .... its because we show up at the bottom as one of the bottom feeders (but just to be sure double click to enlarge)

I guess we can thank that small decree-making-imbecile called Kaisi-yum and a certain flathead called Vorenqi for their brilliant fiscal policies. Well earned zeros to both of these little men.

Schools out but the score card says "will never amount to much".
Posted by Discombobulated Bubu at 6:25 PM