Isa just another day in Fiji

Our children are starving, the economy has gone south, roading infrastructure has gone to the dogs, typhoid is breaking out all over the country, our schools have no water and there is fecal matter coming out of our taps.

The regime in Fiji has put out a series of Nazi-like decrees banning things like gossiping, a by-law to ban people from "hating" others and another to stop us waving flags. We now have a spectacular decree to ban pregnant women from fishing (ie stop them from feeding their families), and instructions from some idiot how to word one's "free" submission to the Constitutional forum.

Ye Gods .... how did we get to be such a spectacular country ? Such a shining example to others in the Pacific ......

And then I read in the news that Mr Bin Binut who is masquerading as Fiji's Prime Miniscule, at the mo, has released the grand news that we we are now related to some obscure country called Cuzzie-stan. Apparently they want to send tourists here to see Fiji's over-magnified Bin Binut.

I can see the tourist posters now. In conjunction with Fiji's Moo Airwaze magnate of course.

Oh well this was coming I suppose - can't hold back the inevitable can we ? 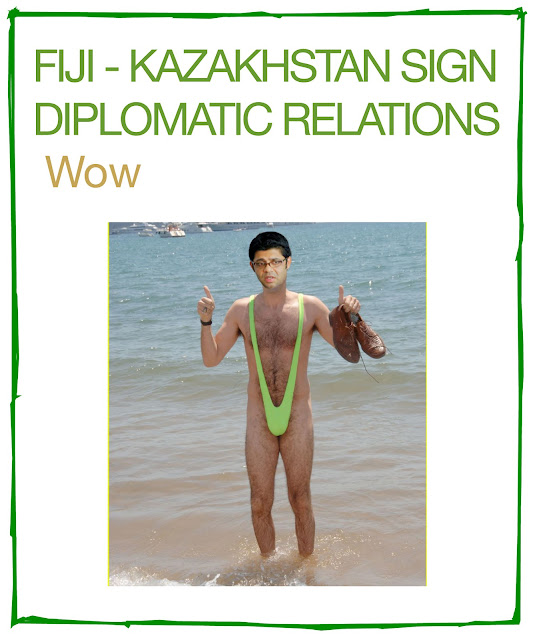 Posted by Discombobulated Bubu at 12:42 AM

Email ThisBlogThis!Share to TwitterShare to FacebookShare to Pinterest
Labels: Isa just another day in Fiji

Bula DeBu
I was horrified to hear him speak, in his capacity as pretender Minister for Tourism, at the funeral of the late Dick Smith, a man who did so much to develop Fiji's tourism in a pragmatic, sustainable way. And here was this young imbecile pup, thoroughly unworthy, speaking at his funeral. At least Dick would see the irony and the humour in it.
BTW, I came across an old letter from Human Rights Watch to the illegal regime, back in 2007. Makes for interesting reading, so guage how very badly things have changed for Fiji since then.
God bless Fiji