Confessions of Neo-Fijians Shaz and Grubs 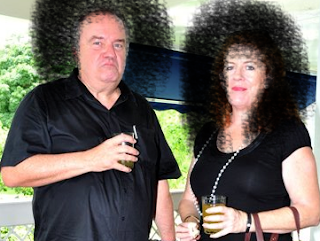 
It was great to have you in Fiji for a weekend. I enjoyed holding hands and strolling along the sea wall. It was so sweet of you to say that I was your muse for your piece in the Fiji Sun, Suva the City of Dreams. Though it is a shame we could not get too romantic as there is always some jogger or walker who wants to stop and talk to important people like you and me. Still it was fun later when we parked in the dusk up by Suva point. Just as well my new 4 wheel drive comes with Government Issue tinted windows so no one could see what we were up to.

Talking of which I was watching the news with my daughter on Thursday night. She watches it every night, because she likes to see if mummy is on the news. If I am not on often enough she writes a rude letter to Tarun Patel at Fiji TV.

“Dear Mr Patel,
Mummy told me to write to you because she only appeared once this week on the news. If she does not appear every night next week you can kiss your license good bye.
Hugs and Kisses
Shazzer’s daughter”

I obviously dictate it for her but I think it is less threatening if it comes from a 10 year old as opposed to the very important Permanent Secretary of MisInformation.

Anyway back to Thursday night. The PM was talking about the lack of transparency from the constitution commission and how it as quite wrong for them to employ an independent thinker like Ratu Jone as a consultant. They have forced his hand and now the AG is going to come up with a new decree to force them to have greater transparency and to base the new constitution on the Military submission. Anyway my daughter asked what is transparency.

“Well” I said “It is a like the special windows in my new car. I am part of Government so I get to look out of my windows and I can see what all the naughty people of Fiji are doing. But the naughty people of Fiji cannot see through the dark tinted windows and see what the Government is doing.” Just as well considering what we were doing in the car on Saturday night.

I am getting really bored because this job s just so easy. There is no challenge any more. I can just say what I want, any time I want and I never get asked any difficult questions by the media. I can understand why the local journalists don’t question me but not even the International media.

For example I said we would hold an Inquiry into the vicious beatings of the escaped prisoners. Even when it came to light that one of the prisoners had had his leg amputated no one asked a single difficult question. In fact I got the police Commissioner to say that we amputated his leg as an act of kindness due to his advanced diabetes. Not one journalist in the world questioned a statement that was so obviously a lie. And no one has asked what has happened to the inquiry.

By the same token Ravuni, the idiot, has announced a record year of investment and the creation of 4,000 (on paper) jobs. He puts out a statement and no journalist asks the question where have the jobs been created? Why are so many graduates unemployed? Now I have successfully cowed the media there is just no challenge, it is SOOOOO boring.

Anyway as we have got away with it this year we are going to put out a statement next year that we have created 10,000 jobs. This will help my election bid, I am so looking forward to being an MP and a minister. Actually it is not such a big lie. We have created thousands of jobs this year but they are all in China or for Chinese workers in Fiji.

We did have some good news this week and we have climbed a number of places in the World Bank Ease of doing business table. Aunty Nur has done really well making it easy to set up businesses in Fiji. You pay her a fee and she will ensure you get all the Government approvals you need. Depending on how much you pay you can get them all in a day. If the fee is big enough she will insure a police escort for all your imports and exports into the country. As a result the black market economy is booming and the number of illegal immigrants is at an all time high. The great thing about this part of the economy there is no tax and no financial records so all the money is shared between the regime and the Asian crime gangs.

Grubby thanks to you and Qorvis for writing the President’s speeches recently.

It has made a big difference to the popular perception of the regime. Previously it was always the AG that was attacking institutions such as the Methodist Church and the Unions. The Itaukei element were beginning to believe that an Indian was running the country, as if. As a result they were beginning to turn their backs on us. But now the President has weighed in on our side and has recently attacked the Methodist church, the SDL and his own people of Bau for their support of a Christian state. He backed that up with an attack on the unions for acting in their own interests and not in the interests of the regime’s elite.

It makes such a difference when you give a speech to someone and they can read it properly. I am always scared when I give a speech to FB because he struggles to read English if the words have more than 2 syllables. I gave him a speech about how it was a joke the SDL want Fijian to be the national language in Fiji. But he kept getting confused by the words. In one attempt he said “It is a joke that your Prime Minister cannot read English and an even bigger joke the Minister of Finance cannot read a set of accounts.” Afterwards, he even asked who the Minister of Finance was. My new policy is that we will just give out written statements and avoid future embarrassment.

I am afraid some of your employer’s, Qorvis, internet tricks have recently been exposed on a blog. http://fijimediawars.blogspot.co.nz/.

I wish that these people would realize that Internet black arts only work if no one knows about them. Now they are all out there for everyone to read. By the way can you make some edits on this page. http://en.wikipedia.org/wiki/Bainimarama . You need to do a search on "Prime Minister" and replace it with "tin pot dictator".

I was following up on this bid to ship all government data and the electronic voter registrations to India. I was talking to Mere Vuniwaqa in the elections office and she told me that the electronic voting machines will come from the Yalamanchili company of India. Apparently it is important that they are preloaded with all the data and that way it is easier to manipulate the result. This really pisses me off. Where is the challenge of running an election campaign for the AG when his victory is guaranteed by a geeky Indian programmer.

Got to dash the weekend is approaching, the sun is shining and I need to get to Trends make myself gorgeous. I am on a hot date tonight and no I am not going to tell you who I am seeing. I will tell you this much I have given my driver the weekend off and I will be driving my heavily tinted car myself.


This is to inform the public that this letter is a piece of fiction. However, some of the people and events mentioned are real.
The 2014 elections will happen. The votes have already been counted in India.
The Minister of Tourism has warned all hotels it is important to keep their protection payments to his Aunty Nur up to date otherwise they too will have a Naviti style lovo.
________
Thanks to Blogger Truncated Lounge for this insight to the latest grubby machinations within the Fiji Regime

Posted by Discombobulated Bubu at 6:44 PM

Email ThisBlogThis!Share to TwitterShare to FacebookShare to Pinterest
Labels: Confessions of Neo-Fijians Shaz and Grubs