So here's the thing, Bainijokarama and his crooked band of emulous social-climbers and political cronies  bang on time and time again about no "politicians" being allowed around them, near them, in their promised next elections and that all politicians are bad …  radiradirah….

What they hell do they think they are themselves if not being "political" ?

Taking more than just a keen interest in partisan policies (just like the regime does) , forming decrees, rules as they please  , proclamations merely to wield power and employing tabetabe (ie 'buying loyalty") tactics with villagers is in its very essence "political" , but not the only way to be ‘political'.

If ragone, like Fiji's idiotic regime , you think that "being political" is joining a political party and operating from a manifesto, you are being pretty dopey.

Countless numbers of academic papers have been written for centuries , theories expostulated and these debates carry on about the meaning and definition of being political - and in their very nature, this exchange of thought is "political". 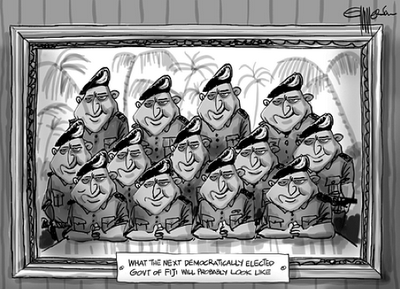 Look it all up on Google.

But Bainijokarama doesn't like to admit this and prefers to google himself only - obviously.

But back to serious matters, this debate about the Church participating in "politics" that rages on and on ad nauseum in Fiji…

Here's the truth - All over the world, Churches and it's Ministers have always been very political, as was Jesus—that’s why he was crucified.

Everybody is political & there’s nothing wrong with being political.

Being political is simply a matter of having an opinion, and working with others to act on that opinion. I as an individual have a right to an opinion about what I believe the goals of society should be, and how society should muster its scarce resources towards meeting those targets.

In other words, being political means advocating for changes .

Churches do have a significant role to play in the arena of public policy debate and development. After all public policy is about values and about working for the common good. The voices of all Fijians should be welcomed - not told that their opinion does not matter.

Laws, policies and legislative initiatives embody important community decisions. When the public dialogues, respectful civil advocacy and discussions that strengthen social cohesion are DELIBERATELY silenced, the Churches , (usually) the last bastion against oppression and injustice MUST come forward on behalf of it's sullen and disenfranchised congregations.

When a self-promoted no-school moron like Bainimarama suggests that the voices of churches should be silent, that is a huge concern , and we should all be uptight about this.

However the good Reverend Koroi I see has again highlighted this point in the Fiji Times  in an article headed "Politics part of pulpit" where he says :


"THE involvement of church leaders in politics was inevitable and could not be avoided.

Mr Koroi said the Bible was full of politics from cover to cover where politics was clearly defined as the art of living together. He said he was saddened to see people attacking church leaders and demanding they need to stay out of politics.

"The book of law gives the standard of personal morality, social justice but they also present the code which regulates the life of the community. This is politics," he said.

Mr Koroi said even the Lord Jesus Christ proclaimed his gospel and died his death in a political context. "This was the context of what we today would call a colonialism situation.

"The work of Christ in our time has become more and more political, not less." Mr Koroi said Christians had always seen the enlightenment of the mind as part of their mission and people knew that the provision of education in schools, college and universities and of adequate scholarship was a political issue.

He said the provision of efficiently-equipped modern hospitals or research facilities to unsolved medical problems of a national health service depended on political actions. "In any event we cannot evade political responsibility, the act of abstention from politics is itself a political act," he said.

"If we do not proclaim God's way in politics, then we are responsible for what happens."
Mr Koroi said no community could exist without politics. However, he said it was for Christians to see they were better rather than worse.

"If politics had got in to the hands of the wrong people and had become a dirty business, it is the job of the Christians to clean it up. We do not live to ourselves and we must not be afraid of soiling our hands." Mr Koroi said if politics was an unclean refuse or a muck heap, the Christian church should be a muckrake."

It is clear that there was an attempt by the Propogangsters in the military regime via their daily rag to DISCREDIT the good Reverend when they printed a story headlined "Stay out of politics, church ministers told".

But as usual this round belongs once again to the good Reverend Koroi who not only calls a pigeon a pigeon but details and clarifies the work of the pigeon.


Posted by Discombobulated Bubu at 11:03 AM

Email ThisBlogThis!Share to TwitterShare to FacebookShare to Pinterest
Labels: On Being Political