I just want to send you a double congratulation. We have won a new award for Fiji and also we are on the verge of pushing that troublesome professor over the edge.

I don’t know if you saw in the news the thing about The Oxford Dictionaries Word of the Year. Basically they select new words that have had the most influence and the top ones are added to the Oxford English Dictionary as a real word. Well the winner was ‘OMNISHAMBLES’ which is defined as “a situation that has been comprehensively mismanaged, characterised by a string of blunders and miscalculations”. I am sure that could be a used a lot with the FSC, FNPF, Air Pacific, PSC………..

But we created the runners up word. ‘FijICTION’. This is defined as “a country where all government statements are based on fiction and not facts.” They used our press release as a prime example.

Prisoner EpeliQaraniqio thanked the prison authorities for amputating his leg. He had suffered with Diabetes for a long time and his leg was in need of removal. He was grateful to the army for brutalizing him so badly that he had to have his leg amputated and it was done for free!

“I want to thank Commodore Bananas for ordering his soldiers to inflict maximum damage on my leg. Without their help I would still have had 2 legs and I would have had to pay for someone to cut one off. This way I got the operation done for free. It was a pity it was the wrong leg, I don’t blame the soldiers they were very rushed when they beat me up because they had to do another 4 beatings that night.”

“Vinaka Vaka Levu” he said with a big smile as he was being carried into court. (In fact it was a grimace as the soldier was pressing on his stump.) “Commodore  Bananas will get my vote in the next election. He truly is a Glorious Leader.” 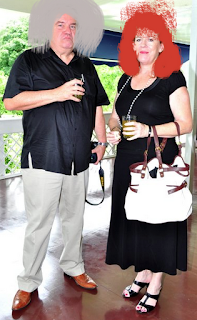 Grubby that was one of ours. It makes me so proud a word has been created as a tribute to our work.

When we fly to the UK to accept the award let’s stop off in France and do a bit of a wine tour in Beaujolais.

By the way Aiyarse, the True Leader, has said we can fly 1st Class all the way as a reward for a job well done. Perhaps we can get a double cabin with Emirates. You know how I get after a few bottles of Champagne. You may get lucky and join the Mile High club.

Now to Marc Edge, we need just one more push to get him fired and deported. Now last week I got him removed as head of department for citing Coup 4.5 as a source on his blog site. He did not take down his other posting about Crazy and so the VC called him in and told him he was not acting in the spirit of the agreement he had reached with me. The stubborn professor refused to take it down without a formal complaint and I have just been too busy getting waxed this week before the exporter of the year award. You know red hair just seems to be sprouting everywhere.

It is a shame the awards were not next week because then we could have won the exporting professors award.

Anyway it was a master stroke on your part to goad him into replying on your website.

I think he will be given his marching orders today. We can count this as a real success. It shows people we can get them sacked even if their work is more than satisfactory. Anyone who stands in our way will be out of a job before they can say “You are a true Goddess Shazzer!”

There is one problem I heard about, from Esther.  The professor’s students like and respect him and they may well mount a protest. We need to manage that carefully because many revolutions start in a university and go on to overthrow the dictator.

Please pass on my thanks to the hackers at Qorvis. It was great they could get all the confidential emails from USP we needed. Talking of which my last private email appeared on your website Grubby’s World. I found that bit embarrassing and I hope it never happens again. Was it leaked at your end or mine? Anyway can you get the chaps at Qorvis to look into how that happened?

Got to dash
Hugs and kisses

Posted by Discombobulated Bubu at 10:14 PM