You missed the best Beach party on Saturday Night.

It was a combined services party with the police and army in attendance. We had the biggest bonfire made up of 600 copies of the new constitution.

Funnily enough they had nothing to light it with so I got out my trusted lighter and it was me that set fire to all waste paper. I felt so honored it was me who destroyed Fiji’s hopes for a democratic future.

We had a really good dinner all cooked over the constitutional bonfire. 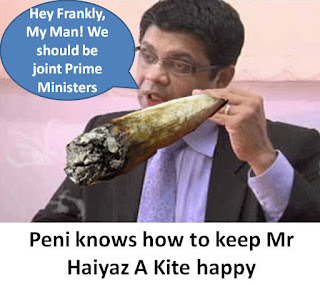 To finish off,  The Police Commissioner Novalorhere opened up the evidence room and we got Peni MoreDrugsPlease to roll joints all evening with that famous branded Fijiian Made Marijuana.

What a night Grubby.

Madam Nazihat von Shameondtme was there making fun of the draft constitution.


“Yash Ghai has completely lost the plot. The Pacific’s longest serving dictator’s needs a constitution that empowers him and his cronies. It does not need a constitution with all that human rights and legal bull shit. I know these things because I am Fiji’s highest paid legal brain.”

She went on to say.

“My own constitution will be put forward to the Constituent Aiyarselickers and they will rubber stamp it as ordered by me, their chairman.”

With that she marched off muttering under her breath that sand was not good for her jack boots.

“The Frankly Bananas Regime will end all colonial ties with England. The first step was to remove the Queen’s head from the currency. The next step will be the removal of English as the official language of the Bananas Republic. It will be replaced by a new language more suited to a 1,000 year dictatorship. To make it easier on the people of Fiji the changes will be brought in over 5 years.

In the first year, 's' will replace the soft 'c'. Sertainly, this will make the sivil servants jump with joy. The hard 'c' will be dropped in favour of 'k'. This should klear up konfusion, and keyboards kan have one less letter. There will be growing publik enthusiasm in the sekond year when the troublesome 'ph' will be replaced with 'f'. This will make words like fotograf 20% shorter.
In the 3rd year, publik akseptanse of the new spelling kan be expekted to reach the stage where more komplikated changes are possible.

The regime will enkourage the removal of double letters which have always ben a deterent to akurate speling. 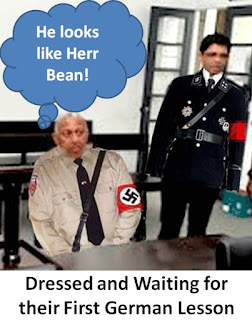 Also, al wil agre that the horibl mes of the silent 'e' in the languag is disgrasful and it should go away.

Grubby can we be German study partners in the New Year?

Got to dash.
Hugs and Kisses
Shazzer

Posted by Discombobulated Bubu at 8:44 PM