You deserve a medal and I will make sure the Glorious Leader gives you one. One of my lackeys in the Ministry of MisInformation brought a copy of the Glorious Leader’s notes for his speech on the Trash Guy Draft. You turned it into a symphony of eloquence and poetry that was mangled by Frankly Bananas. I thought at one point he had got luka stuck between his teeth.

But anyway I digress the words themselves were great and as we learnt The Glorious Leader should never give a speech without the special Qorvis dyslexic autocue.

I have sent you a copy of the notes because I would be grateful if you could sign it and your draft. I want to give them as an example of superlative work to my speech writing team. Whatever Qorvis are paying you should be doubled Grubby. 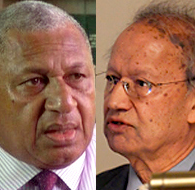 “The Trash Ghai Draft” (as scrawled by Commodore Frankly Bananas)

Thank and Aknowlej that drunk idiot in my the white house. (What’s with that mouse Arch on his upper lip)

My plan to rool Fiji for 1 thou sand casino years was nearly Sah boat charged by Cash Guy (No that’s my chinky frend with the brown pay per bags) Yash Guy. He rote a consti ahhh constitoo ahhhh constitoooshun that tried to make me answerable to the will of the peep hole.

But due to a quick thinking policeman who turned Gash’s to Ashes (That’s good) Make sure to order NoValorHere that all policemen are to carry kerosene at all times.

That was never going to happen As I have always said the new constitution will be 1 person, 1 vote and lots of value in my bank account. That one person will be me but Aiyarse thinks it will be him. Who got the guns baby?

My Legal team have looked at the Yash Guy draft and realized that if it was ever enacted I could be sent to Naboro for the next won thou sand years. That will never happen in my lifetime.

So I ordered his Dyslexellency to order me to get my Legal team to write the consti ahhh constitoo ahhhh constitoooshun draft ver shone 2. The new draft must be:

•    Positive about ME
•    Ensure good governing by ME
•    will result in an enduring regime that will last won thou sand years and beyond
•    Guarantees true dictatorship.

In this ver shone, I will be made King and my son and his sons after him will rool Fee gee for the next 994 years.

As His Dyslexellency has highlighted, there are a number of key provisions in the Ghai Draft that are most valuable, in particular to do with counting my money, transparency for others and enforcement of human beings. 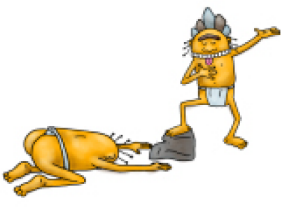 To those who have been commenting on the Ghai Draft, you have just wasted your breath as it is dead and burnt.
The new draft should be available for your viewing by the end of January 2013. Prior to that and upon my return from GOD (Group of Dictators) meeting, I shall send out invitations to various friends to come to a party called the Crowning Assembly. The Crowning Assembly is to have its only sitting in February 2013. We expect, as announced last year, that I will be King by March of this year.

My fellow Fijians, by Tuesday next week, we will put in place the Registration of Political Parties Decree which will set new and internationally accepted standards of how politicians should host parties in my honor.

My fellow Fijians, we are now on the verge of holding elections to make me and my family rulers of Fiji in perpetuity.

As King I choose all the peep hole in the top jobs. After all his good speeches I am going to make Thickoitoga as my prime minister. He is the only man in Fiji who makes me feel erudite and eloquent.

Darl, I don’t know how you did it but you managed to turn that ill thought out rubbish into a coherent speech. Congrats again

Just a little warning. I know you are sitting pretty on the 4th Floor now next to the PM and feeling on top of the world, but don't piss me off. You really do not want to piss me off!

Posted by Discombobulated Bubu at 10:18 AM