AN Australian Catholic missionary who has worked in Fiji for 32 years is reeling from an extraordinary brush with the country's military ruler, who has abused him with incandescently crude messages by phone and text.

Frank Bainimarama has also threatened to cancel the work permit of Kevin Barr, 76.
Father Barr, a founder of the People's Community Network, which aims to help the poorest of the poor, told The Australian he doesn't "intend to be intimidated" from continuing his work.

Father Barr said that after Commodore Bainimarama seized power in December 2006 he appeared "well motivated, and did good things".

"I didn't support the takeover of an elected government, but once it happened it seemed that he wanted to help our work. So I have had a decent relationship with him." 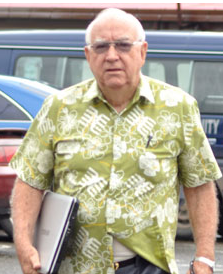 So the missionary was not prepared for the outburst that followed a letter he wrote to the Fiji Sun, in which he joked - following Commodore Bainimarama's new-year pledge to change the flag - that the Union Jack would be replaced within it by a small version of the Chinese flag, "to show that our old allegiance to Britain is being replaced with a new allegiance to China".

Then he called Father Barr "a f . . ked-up priest", and said he had become anti-government.
When Father Barr said he would be prepared to talk with him, the Prime Minister repeated the epithet, added more curses, told him to go back where he came from, and put down the phone.

A few minutes later, Commodore Bainimarama sent Father Barr a text message: "I think you owe the people of Fiji an apology for your childish comments. You give all Catholic priests a bad name."

The priest replied he was sorry if the Prime Minister was upset by his letter to the newspaper, and apologised. He was not anti-government, but disappointed about some developments.

He then received a further text: "F . . k you arsehole. Stay well away from me."
Father Barr again responded diplomatically, but received a message: "Start saying your goodbyes Father Kevin James Barr, Australian national, work permit as a missionary, expiry date for permit 31/12/2013."

He did not reply, but a final text followed: "Go and be a missionary in China."
Father Barr sent a report of the encounter to his archbishop in Suva and the Australian high commission.

Father Barr, originally from Sydney - and who also worked in Papua New Guinea for 14 years - said: "I had heard of similar things happening to a few other people, but I thought it must have been exaggerated. Now I know differently."
Posted by Discombobulated Bubu at 5:30 PM