Thank you so much for the lovely sexy see through clothes you gave me. I look absolutely gorgeous in it don’t  I?

I have attached a little picture but I want you to promise me you will keep your hands on the table all the time you are looking at it. I don’t want to think that you have been waving little Gwubby at my picture.

Talking of transparency we have excelled ourselves lately and completely kept the more stupid decisions of the regime hidden from the people of Fiji.

They can talk about them all they like on the Internet and in the coffee shops of Sydney but they are not going to be talking about it in Suva.

I was in Washington this week for a meeting with Qorvis and we had a workshop on how to hide information but not be seen doing it. It had some clever name like the “The Opaqueness of transparency”.

It was pretty good but I can tell you the tax payers of Fiji paid through the nose for that workshop and first class travel and hotels does not come cheap any more.

I just want to give you a refresher on the best ways to hide the truth from the people of Fiji.

Aunty NURvous ALIen explained it me why it was not necessary for the Government to release any figures.

A Democracy is like a public listed company and you have a duty to inform shareholders of the numbers.

A Dictatorship is like a private company and the public have absolutely no rights to see how their money is spent.

It’s not as if we expect KountTheCash Pooh City to tell us his true salary and similarly we should not expect Frankly Bananas to reveal how much he is paid.

2-      The Empty Promise to do something in the future

The True Leader Aiyarse announced last week that he would reveal Government Salaries in a few months time. He has absolutely no intention of revealing salaries and hopes that the people will have moved on to other issues.

I was really pleased with this statement I made at Edge’s seminar. I told journalists to “report fully and without fear or favour” and to not use the Media Decree “as an excuse not to do their jobs.” It is true PER has been removed and there is no decree stopping them from writing what they want. But I terrify all the journalists and not one of them will write an article if they think it will offend me. The same goes for you my little Grubby but I suspect in your case you are worried about the Qorvis cheques drying up.

When the Fiji TV Licence fiasco was at its height I went on air and said they had been given their Licence. It was completely untrue but the media including Fiji TV were all too scared to point out the lie.

This piece in the Fiji SUNk saying the Constitution is on track.

It completely ignores the fact that The Glorious Leader said the new Constitution would be ready in January.

6-      Repeating something so often that it must be true.

We will have Fiji’s first true democracy of 1 person, 1 vote, 1 value. That sounds really good and the people are beginning to believe they have never had democracy before in Fiji.

But little do they know that 1 person refers to Commodore Frankly Bananas and 1 Vote refers to his powers as the Executive President of the Bananas Republic of Fiji.

7-      Creating a wholly different reason for an action.

Grubby you did really well here over the Trash Guy Constitution. Everyone knows the reason we got rid of the Cash Guy constitution was because it gave the power back to the people and send the army back to barracks. But you excelled yourself with a list of reasons as to why it was inappropriate.
Really good job Grubby.

This is Crazy Walsh’s forte. “But, with respect, Fr Barr should have known better.

The PM is not familiar with the subtleties of the English language and often reacts too quickly to what he sees as personal insult.” That is just a classic cover up as The Glorious Leader made a wholly unwarranted attack on Father Barr.

Frankly Bananas is Bi-polar and so we need to be on the lookout for more of these outbursts. He has decided he is perfectly OK and so is off the meds. 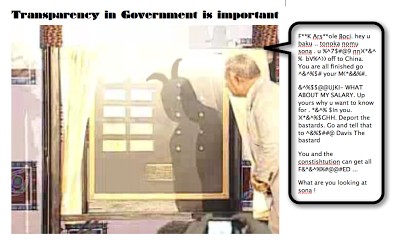 Grubby with these techniques the people of Fiji need never hear the truth again.


This is to inform the public that this letter is a piece of fiction. However, some of the people and events mentioned are real.

Posted by Discombobulated Bubu at 3:10 PM

Email ThisBlogThis!Share to TwitterShare to FacebookShare to Pinterest
Labels: Shazzer Smith Jones on Transparency in Fiji