The Party to end all Parties

I am so excited I am holding a Valentines party and I hope, Grubby, you will come as my Plus1.

There will be lots of Cab Shaz, Shirazzer and I have been promised French Champagne.  The very short French ambassador Mr Gilles Mountaineer, so called because getting into a chair for him is like climbing a mountain for normal people, has become rather fond of me lately. I hope you noticed but he was making very positive comments about Fiji’s push towards democracy in marked contrast to those other petulant, petty and pissy Western nations. Well he has promised me some Champagne for the party. Or at least I think he did, I could not quite hear him as his voice got lost somewhere between my twin peaks...ah oui oui! 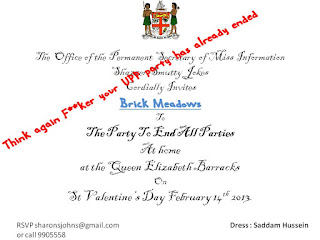 The party is “The Party to end all Parties!” Do you get it?

OMG. I had to explain it 5 times to Commodore Frankly Bananas before he got it.

Do you see Feb 14th is when all the existing politicalPARTIES will cease to exist?

Now do you get it?

It’s so exciting we are going to have it in the Officers Mess at the Queen Elizabeth Barracks. I have also arranged for a world famous band to come and play. The Fiji Village People. They will get Macho Man Thickoitoga dancing the night away and everyone In The Navy will strut their funky stuff as they all Go West. 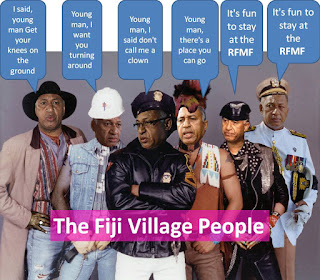 I think their lead singer is so hot. You know I love a chubby man in uniform. Grubby just to let you know "Bula" does not count as a uniform.

I have had a really clever idea and I am getting the catering etc done on the cheap. There are now so many out of work politicians they are all pretty desperate and I have got them for below minimum wage. 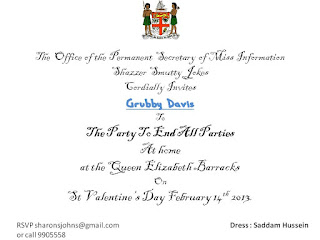 I am so excited because the invites are from me. It makes me feel so important. Grubby if you play your cards right you will be able to make a grand entrance with the belle of the ball.

Aiyarse has promised me a new dress but he insists I have to try it on in front of him (i am getting sideways winks from him recently...could be his new nervous tick but you never know.)

I was thinking of getting Queen Antonia to design something for me. I hear She is giving up the law and is setting up a fashion label called Silk & Briefs.

I think something a little domineering might be in order for the Mistress of MissInformation, don’t you my pathetic wittle Gwubby. Say yes or get spanked (again!) 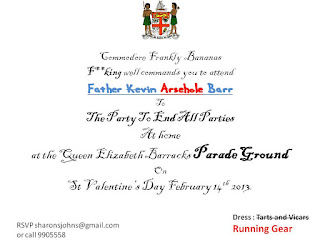 Enough about the party.

You need to do some more work destroying the reputation of Trash Guy. His latest piece on the Political Parties decree is creating havoc overseas. Kumbumbollocks was having a fit the other day because Carr Crash seems to think that his $1m was wasted on the Constitution Commission. I told him absolutely not as most of the Aussie money went straight into a brown paper bag for the Glorious Leader and Cash Guy never even saw it.

QuorVices have recommended an artist who is good at doctoring photographs. His name is Discombobulated Bubu and he comes highly recommended.

Perhaps you can get him to do a picture of Trash Guy with Paula MadeinGin in his judge’s robes. But make sure you keep Paula’s face out of the picture. We don’t want any more blushes from the bench.

Got to dash, the caterer is being so difficult and says he used to be the lead singer of the Fiji Village People but the band had a putsch.

Posted by Discombobulated Bubu at 7:03 AM

Email ThisBlogThis!Share to TwitterShare to FacebookShare to Pinterest
Labels: The Party to end all Parties