The world was exposed today to what goes on if Fiji on a daily basis. 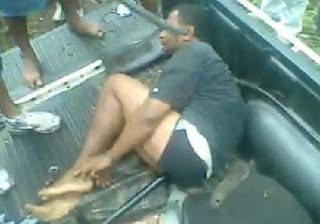 This video (of which the original posting on Facebook has recently been removed by the Regime ) and the grisly actions within it,  is SYMBOLIC of what is occurring in Fiji today.

Fiji is being ambushed, wacked and kicked , and prodded up the rear DAILY. The dignity of its citizens are stripped and laughed at everyday by the rascals that make up the military regime who came to power by force in our small South Pacific island.

The regime is led by a narcissistic, foul-mouthed lying, murderer called Bainimarama and his thugs in the military. Little wonder that our youth also think its ok to bully others and coerce other with violence. They are learning from example.

The military ruffians lead their men with ostentatious, highfalutin attitudes that scream we-are-above-the-law.

The men that are seen torturing and laughing at their fellow human being are typical of the people who have placed themselves in positions of authority in Fiji today. 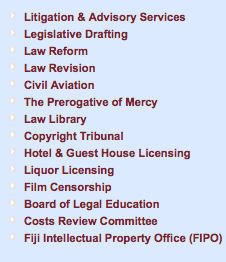 They are aided and abetted in their ﻿villainous mission by a man most foul and most pretentious - a loathsome individual called Aiyarse Kaiyum whom the Fiji public have re-named "the Taliban".

This odious individual has managed to worm his way into the high offices of the military regime and for years the regime has not realised that this ghastly man has been using their prejudices, fears and irrationality to his own ends.

As Micheavellian as can be, he has choreographed his way into the hierarchy, first by dressing incongruously in the native garb, brown-nosing relatives of the who's who of the regime,  then marrying a naive native girl to fool people into thinking that he really does love the natives. 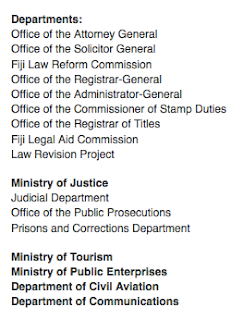 And as true as he was to his nepotic style, appointing his wife quickly to Director of Tourism, he didn't tell her that he had employed many of his opportunistic flames to work in offices close to him. A warm & fuzzy little adoring harem. Who would have thought ? ....  in the midst of all this upheaval.


Aiyarsi ,or "His Heinous" (as he is referred to behind the sniggering hand in the public service) has used all these little props to get his revenge on the native Fijians on whom he once wrote a thesis proposing a shut down (or sunset clause) of their cultural and traditional ways of life .

His next move was the gather all the prominent Ministries and portfolio's (see right) he could lay his hands on so he could influence the decision makers ... hence the reason the Fijian public refer to him as "Minista for everything"

So while he churns out the dastardly decrees that the regime use to "govern" the country, both he and and his fellow thugs have no problem with the use of force and violence because their type of governance is the kind that has no qualms about terrorizing and coercing citizens to (quietly) accept their tyrannical rule.

They use the pack mentality to cower their victims into submission and get their way. Like in the video, they laugh and they joke about their hapless citizens who do not have the same swords for which to parle back and forth.

I am really really sorry to say that this is the reality of Fiji today.

These same men will sit in the Church pews every Sunday in their Sunday best and not have an iota of conscience about their actions. Instead it is more important to them that they strive to look pious and reverant to their community. Morality , ethics, and humane values be damned !


"At the same time they are mouthing their commitment to democracy to get the international community onside and to get them to keep the money coming.

This is where the violence against the prisoners is coming from. These state functionaries like their political masters have no abiding belief and commitment to democratic values. For them it's a nuisance which they dispense with whenever they can."


And for the Fiji Police to be quoted saying they are "investigating" is but a very sick joke.
Posted by Discombobulated Bubu at 7:47 PM