Fijian police, it has been reported of late are VERY concerned that Indian muslims calling Fiji home have been joining the Taliban for training.

I am not sure why they are wasting precious energy and tax-payer funded resources.

Fiji is ruled by the Fiji version of the Taliban already.

Headed by the vindictive Attorney General, Aiyarsi Kaiyumi and his extended Taliban family, they have their snots in every corner of the ruling trough.

And they are as busy as hell riding rough-shod over the natives; our qoliqoli, our customs, freedoms , and forcibly euthanizing our traditions behind the facade of good governance.

This veneer is fronted by Aiyarse's fellow narcissist comrade and power hungry naval deckhand called Frank Bainimarama, who by force took over a legitimate government of Laisenia Qarase in 2006. Frank, of course was really running from charges of treason which were about to be foisted upon him at that time by Police Commissioner Hughes.

If Hughes had been successful at the time, it means that Frank would be behind jail bars today serving life, alongside George Speight. Sitiveni Rabuka would have also joined them sooner or later, for Fijian society had a duty to itself to halt the slide of the coup culture. And the only certain way to do this was to ensure treason charges would never be sidelined in favour of immunity for persons who carry out terrorist acts against the State.

Frank is so blinded by the his love of power and ego, that he doesn't care what is happening behind the Taliban's veil of deceit. He continues to openly ego vote-buy, opening Chinese funded bridges, allow children to wash his feet in public like Jesus and rob the public coffers to bribe soldiers with medal ceremonies.

Aiyarsi, with his glib veneer is tasked with seeing this is carried out, and Frank doesn't even think about the means to the end. Why should he ? He can't stop now or he might be arrested - especially if the Fijian people (that he doesn't trust) take back the reins of government via a true people's referendum.

Aside from the fact that Frank was sprinting away from treason and murder charges, he, and his various mouthpieces now clearly believe it is the military's birth right to rule Fiji. The military treats the constitution, the most solemn and sacred document in Fiji, like a public football as they entrench themselves in the lies that cover their improprieties.

Any resentful or megalomaniac soldier can become our PM, by firing a shot at the Fiji president and 'capturing' a nearby radio station (already owned by the Fijian Taliban). Its easy.

WHY FRANK and AIYARSI WILL NOT and CANNOT RELINQUISH POWER

Like in Nigeria's case, the international community is already laughing at Fiji for endlessly convening so called "Charter" meetings, Constitutional conferences, and other meetings to discuss this and that .... and so and so on. (Meanwhile in the background, draconian decrees keep getting churned out by Aiyarsi to keep the people silent and repressed).

The Taliban regime in Fiji do not sincerely believe that Fiji needs a new constitution. They are merely playing for time by window dressing and tactical maneuvering. What they really want ,is a autocratic one party dictatorship to keep themselves in power (hence all the decrees recently introduced to block and restrain certain political parties, popular leaders, and embargo public debate, meetings and campaigns)

Showing contempt for the process of seeking a constitutional draft (under the guise of seeking a path back to democracy) 'just cos' they didnt like the one convened by Prof. Ghai is but a ploy for buying time and digging in.

If there is truly to be a people's government that emerges in the promised elections 2014,  the so called Assembly that is supposed to convene 2 months ago should be encouraging a
constitution that is in the best interest of 800,000 some Fijians,  and not one that suits the regime which currently places itself above the constitution.

Governing a nation without a constitution is analogous to playing rugby without rules. As we have been witness, the goalposts have so constantly been changed and moved almost daily, we are dizzy from watching. Hence, it does not come as a surprise that we are drifting like a coconut on the ocean with no direction whatsoever.

Any constitution can only be ratified by a national referendum or by the people's representatives, and not by the unelected Assembly or regime appointed council of sorts.

The main reason on why it is too late for Frank and his Taliban family to give up their power and comfort , is that they know that a constitution approved by the people could be used to prosecute them for their misdeeds. Understandably then they have every reason to be VERY VERY AFRAID of the wrath of the people.

Therefore it follows, the regime will only approve a constitution that pardons them for their misdeeds and provides them with the freedom to go about their dirty business as freely as they please.

In the real world, where REAL transparency and accountability matter, Fijians must regard anyone abolishing their constitution as a treasonable offence that receives the severest form of punishment in the country. 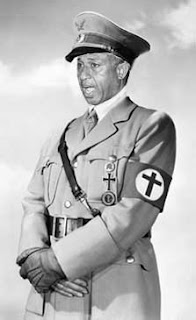 Therefore, in order to HALT the coup culture, Fiji must bring treason charges against those living military officers that overthrew past Fijian constitutions. Fiji would not be the first nation to prosecute former dictators for treason, corruption and human rights abuses. South Korea succeeded in trying their former dictators and on the guilty verdidt were sent to jail. Argentina jailed three generals and Chile prosecuted former dictator Augusto Pinochet.

All the laughable excuses that the Fijian coup-plotters came up with (clean up campaign, qoliqoli bill, or that God sent them as saviours for Fiji) should not stop us from punishing coup plotters, as only a people's trial and conviction of past coup plotters will serve as a deterrence to future coup plotters.

Coups d'etat's  will only end when we send to trial, and sentence former military Heads of State, governors, cabinet officers and the members of the so called Military Council to life imprisonment for usurping powers.

As responsible Fiji Citizens, we must re-establish the rule of law, not the rule of raw power.

The members of the Military are not above the law.

We cannot have one law for the rulers and another for the ruled.
Posted by Discombobulated Bubu at 3:03 PM

Email ThisBlogThis!Share to TwitterShare to FacebookShare to Pinterest
Labels: The Fijian Taliban

The harsh yet simple truth. If only SLR would lead by example and sink any hope of immunity by giving himself up.

Vinaka Disco-Bu for voicing my thoughts so eloquently.

I agree. A succinct summary of the state of play. Forget SR. That is too long ago. Clean up those behind 2000 who have escaped prosecution, then move on to 2006 and 2007.

The Aus and NZ governments should warn their citizens who are aiding and abetting these criminals. If you break the law of another nation while you are there we cannot and will not assist you.

Gates, Pryde etc.. Get ready for justice. A concept that has been foreign to you for so many years.

Propaganda what waste of my time reading aload of rubbish

Vinaka Anon - but thanks for taking the time to poke your nose into what you should be knowing.