MICHAEL FIELD
Fiji police have launched an urgent investigation into a report that two or three Fiji citizens are training with the Taliban in Pakistan.

Agence France-Presse (AFP) reported that Pakistan remained a major destination for radicalised Muslims bent on a life of jihad, despite hundreds of US drone strikes, the death of Osama bin Laden and the fracturing of Al-Qaeda. 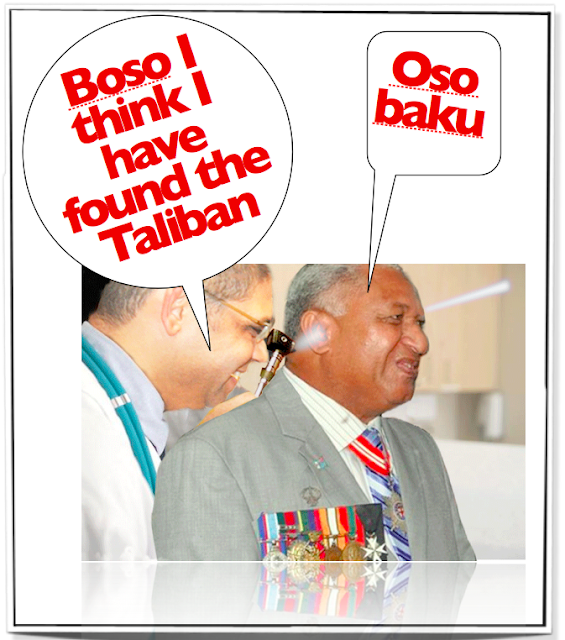 The report said foreign fighter numbers were increasing with potentially 2000-3500 foreign fighters in the Afghanistan/Pakistan border areas from about 30 different countries.


"A few months ago, we even welcomed some (two or three) people from Fiji for the first time," the Taliban member told AFP.
"There are more nationalities because they face the same problems.
"They tell us that they feel left aside by capitalism and discriminated by unfair laws, like the Swiss one on minarets or the French one on hijabs."


The military head of Fiji's police, Ioane Naivalurua, told Fiji state radio the police were seeking more information on the report. Naivalurua said police were ''using their network abroad to help the investigation''.

Fiji is home to 53,000 Muslims, mainly of Indian origin. Most Fiji Muslims are of the orthodox Sunni branch with a small number of Ahmadiyya Muslims.

The majority of New Zealand's 36,000 Muslims are from Fiji.
Posted by Discombobulated Bubu at 6:06 PM

Teacher’s Comment’s: Joey is by no means in the high academic achievers ranks. However, his organisational skills are extremely well developed. His position as cadet leader is fitting. However, he has not made a good school captain. A new School Captain will be voted in soon. He has formed a close relationship with one of the exchange students, Greenham Divas. His behaviour seems to become unruly when this exchange student is absent from school. Needs to think before speaking if he wants to be a prefect.

Principal’s Comments: Joey has been an exceptional cadet leader. However, when he has been acting school captain he has made some fundamental errors by listening to the wrong people. He tends to seek guidance from the USA exchange students in exchange for his lunch money. He then goes hungry and the poor advice they give him and his extreme hunger leads him further into trouble. His grade would have been in the “C” range. However, his close friendship with the captain of the debating team has caused his reputation to be irreparably destroyed. I have recommended he be suspended. Once his association with the captain of the debating team has been severed, we believe he may have prospects of rehabilitation.

The Captain of the Debating Team, Aiyayai (acting Vice Captain)

Teacher’s Comments: He is a fair student yet over estimates his abilities. If he spent his time studying rather than looking for short-cuts, he may have had a future. He has received very average grades, yet his parents are continually at the school protesting his D’s and F’s and asking why we are discriminating against him. It appears his own over estimating of his academic capabilities has stemmed from his home life. His debating skills are sadly inadequate. He has a tendency to pout and attack the adjudicator for discriminating against him when the school is debating other schools. He was only made captain of the debating team after his parents mortgaged their home and paid the other children large sums of money to vote for him. The investigation into this matter is ongoing.

Principal’s Comments: The school nurse has a degree in psychology. She has expressed her concerns to us about young Aiyaiyai’s mental health. She believes his condition could improve if he was medicated. However, his parents adamantly deny he has mental health issues and continually blame the school for not realising his brilliance. I have recommended he be expelled immediately.

Grade: F (to be expelled as soon as possible)

Teacher’s Comments: An opportunist in the extreme. Clever, yet highly manipulative and cunning. He has the ability to say one thing and think another. He was able to remove Prefect Marshmellow and make it look like the acting Vice Captain was responsible. His ambitions belie his capabilities. The playground teachers have been warned to keep a close eye on him.

Principal’s Comments: Tiny appears to be a compliant student. However, he likes to control things from behind the scenes. He can be a threat to the younger boarding students (see incident report below).

Grade: F (on his last warning)

Teacher’s Comments: Is close with former School Captain, Chorboy, yet keeps his associations under wraps. A capable mathematician, yet he writes the answer first and then inserts the equation later. His primary intention is to feather his future nest. He tends to bully the other children but is a coward at heart.

Principal’s Comments: Paully is a bully and he creates friction with the other children. He shows hostility to some children on the surface yet hangs out with them on the weekends. He really wants to be School Captain and knows that it will not happen unless the schools musicians (formerly known as the Flute and Lyre Players- FLP) students vote for him.

Grade: F (on his last warning)

Teacher’s Comments: Billy is an above average student yet his behaviour in recent times has been disturbing. He has been caught making false complaints against other students. Apparently the word got out that if you give the Vice Captain your lunch money he will pay half to Billy to say whatever you want to the Head Master. This has resulted in three students being given detention unjustifiably.

Principal’s Comments: Billy has shown a solid degree of academic performance. However, his recent behaviour in abusing his role as prefect has caused us great alarm. We believe that his behaviour has been largely due to the influence exerted over him by the vice captain. Like the cadet leader we believe he has prospects for rehabilitation but we are forced to suspend him indefinitely at this point in time.

Teacher’s Comments: A bright and gifted student. He has the best intentions and clearly loves his school. However, his association with the cadet leader has blinded him somewhat to reality. The cadet leader values his opinions but seldom takes his advice. He has a tendency to become violent and allows fools get under his skin too readily. If he were to be more diplomatic and the cadet leader took his advice from time to time, the school would be a more harmonious place.

Principal’s Comments: Greenham has settled in well as a foreign exchange student. He is starting to learn that the other foreign students from the USA are not a good influence on him. He needs to stand his ground more firmly. The school nurse claims his immune system is somewhat compromised. He needs to build his resilience or risk constant viral attack from microbes.

Parent’s and Citizen’s Association Comment’s: We are starting to regret our decision for recruiting CW as our distance education teacher. He does not seem to have a proper understanding of the school environment and has only made short visits in recent years. He seems to put all of his time into a few students and completely ignores our indigenous students. He has been teaching subjects of which he has no knowledge and has confused a great number of students. His motivations are impossible to read.

Principal’s Comments: CW gets on well with a few of his students, like the cadet leader and the foreign exchange students. However, his condescending and discriminatory treatment of the indigenous students has forced me to seek his termination.

Parent’s and Citizen’s Association Comment’s: We have identified that the behaviour of the acting School Captain (cadet leader), the acting Vice Captain ( captain of the debating team) and the school prefects (Tony, Paul and Billy) has been influenced by the school counsellor. The school counsellor has exceptional academic and practical qualification, yet she has failed in her duty of care to the students named above. Her close association with the vice captain’s parents represents a serious conflict of interests.

A serious issued arose early in the term. One of the new junior students was cautioned for playing with his genitalia in the classroom and the schoolyard. Our investigation revealed that the young lad Mommy Somean, had approached the senior prefects to find out how he could one day be a prefect. He was told to expose his genitalia as often as possible and play with himself with great vigour.

Our investigation proved inconclusive. The prefects were all warned that such behaviour will not be tolerated in our boarding school. We also concluded that little Mommy was too immature to be playing with the big boys. We have encouraged his parents to place him in a community school and advised them that he should repeat a year as he is much much smaller than the other boys. His parents have asked if he could return to the school next year, despite his cousin Aiyaiyai being expelled. We will consider this request at an appropriate time. We have concerns that he may share some of the traits of his older cousin.

The school has been through a tumultuous time with the graduating class of 2013. After the expulsion of the acting Vice Captain (Aiyaz), the suspension of the acting School Captain (Joey) and one of our prefects (Billy), we expect the students ranks will return to a more normal state.

The instant termination of our School Counsellor and Distance Education teacher, will also allow for a more productive and harmonious school. We are expecting new members of staff to come on board in 2014. On behalf of the School, Executive and the P and C, we hope the high standards of performance and reputation will return to our school thereafter. It has been a testing time for us all. It is unlikely that we will be accepting any foreign exchange students from California’s Qorvis Elementary School in the future. They have been an ineffective addition to our school and do not share our core values.