The Bainimarama/Khaiyum Constitution (BKC) is the final stage of a "successful" coup.

If elections are held in 2014 and an elected Government comes into place, the international community may be relieved to see  a cosmetic end to the most painful chapter in Fiji's modern history.

But we need to remember, the Bainimarama Regime has never abided by
In 2006, Bainimarama and the RFMF, removed the constitutionally elected prime minister and made himself Prime Minister.

He promised elections by 2009 but broke that promise and has now ruled for more than six years.

In 2011, the Regime appointed its own Ghai Constitution Commission (stacked with Regime supporters) to consult widely and write a Constitution which abided by all the Regime's non-negotiable principles (which they did) AND which would be vetted by the Constituent Assembly AND the Chief Justice's Tribunal.

But with Ghai Draft not completely to the Regime's liking, both the Commission and the Draft Constitution, were flippantly trashed.


"Over the next six months, meticulous comparisons between the Regime's Constitution and the Ghai Draft Constitution- what exactly is changed, added and left out - will reveal more facts to Fiji and the world, about the Regime's "real Roadmap".

I also noted that Fiji people could


"watch with deep interest (and remember) who exactly are the "people's representatives" who will turn up to rubber-stamp the Military Regime's Constitution. There is a definitely a new ball game in town."

Well, no need for Fiji people to tire their eyes any further: the Regime has moved the goal-posts again, and there won't be any Constituent Assembly. 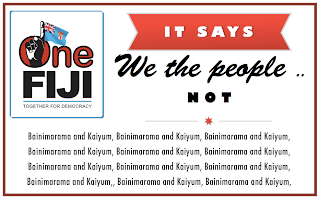 Why not?  Bainimarama alleges the political parties were fiddling their registrations (and the sun was shining).

Bainimarama has decreed: "You, the people of Fiji" will now be the Constituent Assembly.

So the people of Fiji can personally write or talk to the Regime (with their names, addresses, phone numbers etc.) and the Regime will take on board your comments.

Bainimarama promises "we will finalize the Constitution to have it ready for implementation no later than the 12th of April this year".

So even the pliant President won't be required to assent to the Constitution, but "We"?

There is a new ball game in town and the Baimarama/Khaiyum Team is winning.

As the purchase and arrival of the Airbus shows, it is incredibly easy for Regime spin doctors to get Fiji's population people to sing and dance, cry with pride at being a Fijian and "owning" their own airplane (even if it is on mortgage, and the only difference is the new colors inside and outside the plane).

Out of sight and out of mind are Fiji's

Our people, no doubt orchestrated again by the Fiji Sun and Fiji Broadcasting Corporation, will soon sing and dance over the new Constitution, promising racial equality, with one man, one vote.

The rest here, is merely for the record.

What's different in the BKC?

The Ghai Draft Constitution did not grant immunity for abuse of human rights; it granted immunity only to those who took an oath renouncing their support of illegal regimes; and it allowed citizens to go to court with their grievances and for damages.

The BKC grants total and unconditional immunity from 2000 to the 2014 elections, with no exceptions, no legal challenges allowed, or recourse for damages for anyone injured by those granted immunity.

People are still not understanding that the immunity being granted is not from 2006, but from 2000 "under the Limitation of Liability for Prescribed Political Events Decree 2010" (section 153 (1)).

Gone is the Ghai requirement (to discourage future coups) that all members of the security forces (army, police and prisons) must be explicitly required to not obey unlawful orders from their superiors.

So, without that provision, the security forces can continue to follow unlawful orders, with total impunity, as they have done for the past six years, and do more coups when they feel like it.  So look forward to ADACIP (no prizes for guessing the two meanings of this acronym).

Gone is the requirement that Regime Decrees must be modified in order to be consistent with the new constitution and its fundamental human rights, and that legal proceedings terminated by decree, must be "revived and may be proceeded with under this Constitution". The Ghai Draft Constitution even listed those decrees that had to be changed.

The BKC states that all decrees and promulgations will continue in force. No legal challenges will  be tolerated. No legal cases will be resuscitated (so forget the Burness pensioner case).

In the Brave New World of the BKC, no future Parliament will EVER be allowed to change any of the entrenched provisions such as the unconditional immunity and restriction of rights to go to court.

There is no longer any role for the Tribunal to be appointed by the Chief Justice to "approve" the BKC.

The Chief Justice can now say with a straight face (as he did a few days ago) that the judiciary must objectively and impartially apply the law as it is, and not be part of  the law-making process.

Right ....(we will all practice amnesia over the events of 2006 and the immunity provisions for the judiciary in the BKC).


112(4) also states that "a judicial officer is protected from civil or criminal action for anything said or done, or omitted to be done, in the performance of a judicial function".

The Attorney General, in addition to many other powers, is also granted powers to "intervene in proceedings before the High Court" (40(7)).

Also gone is the requirement that the Regime would have had to give way to a caretaker government six months before the 2014 elections.

Those with the time and energy can go through the BKC and the Ghai Draft and see what's been added and what's been deleted.

That relating to the media may be read here, in Marc Edge's commentary: 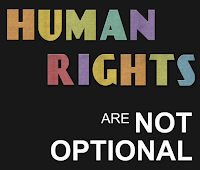 With the elimination of the Upper House, there is a total lack of checks and balances to Parliament.

Once a Bill is passed, no one, not even the President has the right to dissent, or even ask for a reconsideration. The Bill will be "deemed to be assented to" within 7 days.

All public service officers will be "under contract".

Constitutional lawyers are going to have a field day.

Who is the BKC for?

The Oaths and Affirmations at the end of the BKC document states that Prime Ministers, Ministers, Parliamentarians, and judicial officers must all swear allegiance to the Constitution.

Except the Oath and Affirmation for the next President. An interesting faux pas?

With Commodore Bainimarama declaring that he will stand for elections as Prime Minister, who is in their plan for President?   Some might think that it will be Superman.

But a real international PR scoop and yet another "first" for the Regime and Fiji, might be an Indo-Fijian AND woman President?  No prizes for guessing who THAT might be.

Is the Constituent Assembly Dead?

The Regime refuses to call a Constituent Assembly.

But nothing stops the people of Fiji from calling their own People's Constituent Assembly.

All the social, political, religious organizations and concerned individuals who want to, can have a two day meeting to discuss what is in the BKC; agree wherever they can on common concerns and positions.

They can publish their communique through an advertisement in the media and as an open letter to Commodore Bainimarama. They have nothing to fear: all this is allowed by the BKC.

Fiji people have so far meekly accepted being herded here and there, like sheep through the corrals of Animal Farm.