Real Fiji reveals the LIES THE JUNTA are trying to perpetuate through their hastily revamped draft conshtitushion:

1. The military junta have told you that the authority to make laws in their new Constitution is vested in Parliament right ? Wrong.

2. The military junta have told you that the prime minister can be removed by a motion of no confidence right? Wrong.

The self-appointed PM and President are in cahoots and run things together and forever. Frankie can unilaterally instruct Epelie to prorogue parliament [s.56(2), s.81, s.159(1) “session”] so that a motion of no confidence is not introduced [s.93(2), s.92(6)]. 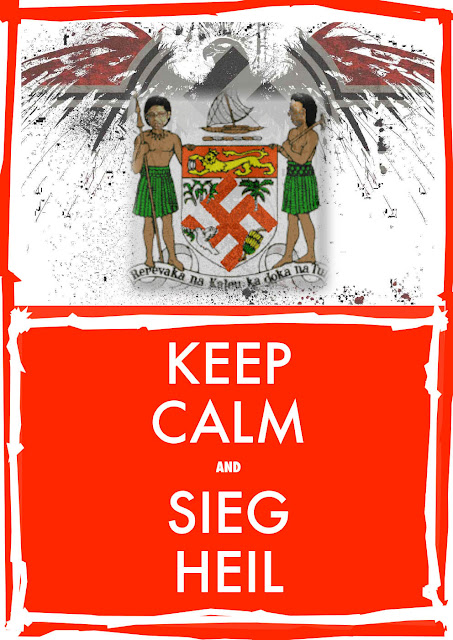 3. The military junta have told you that parliament can be dissolved if it has lost confidence in the government right? Wrong.

4. The military junta have told you that parliament will determine the rules and procedures for its internal governance right? Wrong.

Frankie and Aiyazie will craft the standing orders of parliament [s.70(2)] including the notice requirement for introducing a motion of no confidence against Frank but more importantly that relating to the disbursement of public finances in the absence of 44 parliamentarians (see below).

5. The military junta have told you that parliament will consist of 45 members right? Wrong.

Frankie ' as Prime Minister' will be your parliament [note 1 above] and government [s.90(1)] and minister for everything [s.91(5)(c)] when parliament is prorogued.

Alas no more coups and state of emergency in Fiji.

One Man + One Vote = One Man Constitutional Dictatorship.

Now i get it!..Wlecome to the rise of the island of the APE , MONKEY , CHIMPANZEE OR SHUD IT BE MORE IMPORTANTLY..THE BABBOON...OI...GRUBYY...U GONNA CORRECT ME FOR CALLING YOUR DEAR LEADER..'A BABBOON?'