When You Can Say Nothing, Video Everything

FROM : THE GLOBAL MAIL


The Fiji Sun newspaper is a despot’s dream. It routinely – and shamelessly – publishes news stories by writers within the country’s Ministry of Information. For sports coverage, it often relies on stories supplied by the Fiji Rugby Union.

At lunchtime on Wednesday, on the paper’s website, the five top-placed stories all concerned the current tour of Fiji’s north by the Prime Minister, Commodore Frank Bainimarama. The tone of each would surely sweeten the most vinegary of government spin-doctors.

The first headline read: “Why PM in North: Listening to People, Responding to Needs". Those following were equally heartwarming. Among them: “PM Hands Over Home”; “PM Promises New School Block”; and “PM Commends Military”. Most were accompanied by a rather wooden photo of the leader listening, responding, handing over or commending.


Fiji makes for beautiful photographs, but cameras wielded by Fijians are showing a different side of the island paradise.
This is the kind of winning coverage a country’s leader can expect when his forces seize a newspaper’s publisher from his home at night, spirit him to the airport and force him onto an outbound flight, despite a High Court injunction against the deportation. That’s what happened to the Sun’s former publisher Russell Hunter four years ago, after he ran a story about a minister’s failure to pay his taxes. Since
then, The Sun has shone more reliably from the Commodore’s rear.

Its competitor publication, the venerable Fiji Times, which is less riveted by Commodore Bainimarama and his government, has meanwhile unhappily been the recipient of ill-luck; it has suffered the loss of millions of dollars of government advertising to The Fiji Sun. And three weeks ago, the Fiji Times was fined $300,000, and its editor sent to prison for six months after the newspaper was found to have scandalised the Fiji judiciary. The Times had reprinted in its sports pages a New Zealand newspaper article which quoted a soccer official’s views on the integrity of the bench. The High Court gave the Times an extra wallop because, it said, an aggravating factor in the paper’s latest transgression was its apparently unwelcome suggestion, published last June, that the Fiji Courts may not be independent of the Government.

The Bainimarama Government’s efforts to better manage its media profile have extended to its engaging the well-known Washington lobbyist and spin-doctoring outfit, Qorvis Communications, for a fee of USD 40,000 a month ($ Seventy Two Thousand FIJIAN Dollars in taxpayers funds every month = $864,000 per year)

However, nine minutes of shaky mobile-phone video uploaded to the internet on March 4 are currently taxing the Fijian Government’s faith in media management, especially its vigorous efforts to convince the rest of the world that its islands and atolls are safely back on the track to democracy. (Commodore Bainimarama has twice taken unelected power — but he has offered elections next year.) 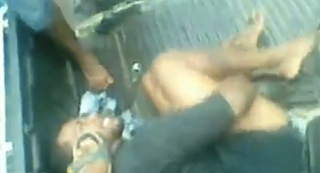 The video that’s vexing the government shows a handcuffed young man lying in the back of a utility vehicle being repeatedly beaten with a wooden pole and then with a metal rod. A snarling dog is then let loose upon another victim, it drags him by his shirt past his attackers who then beat him as he falls to the ground. Fijian police initially denied reports that the beaten men were prison escapees. But this week some prison officers were sacked by authorities in relation to the images on the video.

Within two days of being uploaded, the video had racked up 65,500 views, with other videos added; these had been reported by the international media, and had prompted censure of the Fijian Government by the New Zealand Parliament, where on Friday protests were carried out  Wellington and Auckland.

The spotlight on the incident was intensified by Commodore Bainimarama himself, who on the weekend aired his view that no matter what an official investigation might uncover, the attackers would not lose his confidence:


“At the end of the day, I will stick by my men, by the police officers or anyone else that might be named in this investigation,” Bainimarama told a local radio reporter. “We cannot discard them just because they’ve done their duty in looking after the security of this nation and making sure we sleep peacefully at night.”

The victims are alive and back in jail.

While the Fiji Sun has pretty much managed to look the other way in terms of reporting on the video, not so the feisty, if embattled, Fiji Times. The paper found the mother of one of the bashing victims, and filled its front page with her tear-streaked face, and the words: “My son, my son.”

The video’s race around the world has prompted an underground, student-led campaign from within some Fijian secondary schools, called Say Nothing Video Everything.
Camera-equipped mobile phones and the internet have created an evidence-gathering mechanism far more difficult to refute than a signed witness statement. They are a potent tool for those bent on exposing the truth.

Dr Marc Edge is a critic of Fiji’s media controls and as a result, another victim of the Fijian Government’s discomfort with such criticism. Edge, an eloquent Canadian, was the head of journalism at Fiji’s University of the South Pacific until late last year. Then he abruptly left. In a posting on his blog on the weekend, Edge noted that it was the American media theorist Neil Postman who said that video carries a different kind of truth than mere words can express. While words are best at carrying abstract ideas, moving images are best at carrying gut emotion.

As Edge says, the internet now allows near instant streaming of videos to audiences of millions — making it the most powerful medium yet.

Out of the phones of babes may yet come the revolution.
Posted by Discombobulated Bubu at 6:37 AM

Email ThisBlogThis!Share to TwitterShare to FacebookShare to Pinterest
Labels: Video Everything, When You Can Say Nothing